“The Best Latin Album of The Year”
To The Stage In Los Angeles With An August 30thPerformance At The Nokia Theatre
The First New Release In Five Years From The Legendary GRAMMY & LATIN GRAMMY Winners, “El Objeto Antes Llamado Disco” Was Selected As The Best Latin Album of 2012 by iTunes, Spotlighted InNPR & The LA Times’ Best Albums of 2012, And Hailed by Rolling Stone As “Café Tacvba’s most daring experiment to date”
Now, After Critically-Praised Main Stage Performances Earlier This Year At SXSW andCOACHELLA, Café Tacvba Launch Their First Nationwide Tour Of The United States Since The Release of “El Objeto Antes Llamado Disco”
CAFÉ TAVBA’s “El Objeto Antes Llamado Disco” (The Object Previously Called An Album)
Is Currently Eligible For LATIN GRAMMY Consideration:

Café Tacuba celebrates the art of creative meandering… Café Tacuba doesn’t chase fads…But the band displays its mastery of 21st century electronic intertextuality  …”Objeto” [is] an object of obscure desire, filled with tantalizing possibilities about where rock may be headed, and how, and why.”  – Los Angeles Times

“Cafe Tacvba hits new mark with ‘El Objeto’: Cafe Tacvba may be one of the most important rock bands alive…The new album from Mexico’s fantastic quartet is ambitious, groundbreaking and quite simply, superb. The album has the depth, breadth and exploration of the later works of The Beatles, with touches of progressive rock and the band’s own unique recipe of electronica combined with Mexican folkloric sounds and pre-Colombian rhythms. …the best moment to discover one of the most remarkable artistic collectives of our time.”

“The group’s first new record in five years pulls off a remarkable feat: Coming two decades into Café Tacvba’s career, it’s as honest, humble and refreshing as the band’s debut. …El Objeto Antes Llamado Disco is fantastic: Reflective and lyrically gripping, Café Tacvba perfects its mix of Mexican folk, rock and electronica. …By releasing such a personal and introspective album — about universal issues like getting older, lusting after someone who isn’t good for you, and seeking joy — they’ve created a record that captures and mirrors much of what Mexico faces today.” –NPR Music – “First Listen”

“This is a band that has never rested on its laurels — which is ironic, because if any Latin rock band gets to gloat, it’s Café Tacvba. It’s outlived all other rock en Español icons from the ’90s, and its music is truly the soundtrack of an era. Part of Café Tacvba’s success can be attributed to the honesty with which it writes. No marketing ploys here: The new album does not contain much in the way of drugs, sex, romance or rock ‘n’ roll, but instead engages in earnest introspection about life, aging, loss and living in a country ridden by violence. The band has proved that it consistently evolves with each record, but one thing always remains the same — a desire to just keep making good music.” – NPR –“best music of 2012”

“With a new disc, the kings of Mexican art rock get back to where they once belonged. Latin-rock historians take note: 2012 is the year when the genre’s most transcendent band made a triumphant [return]… Café Tacvba are the Mexican equivalent of the Beatles or Radiohead depending on your generation. Now the quartet are releasing their most daring experiment to date” – Rolling Stone

“It’s good to have [Café Tacvba] back. Rubén Albarrán, an astonishing singer, brings his full game …But what really seems new on “El Objeto” is its degree of introspection. Also, while its lyrics can be as fractured and imagistic as ever, emotionally it’s the warmest album Café Tacvba has made.”- New York Times

“★★★★ ½ – Mexico’s favorite indie rock heroes Café Tacuba reinvent their own crazy wheel with El Objeto Antes Llamado Disco. Since the band has always recorded infrequently, each recording is an event. … at the very threshold of 21st century indie pop – these ten songs prove that they are, quite literally, one of the finest and most adventurous rock bands in the world.” – ALL MUSIC

“★★★★ – Mexico’s Café Tacuba [is] back with a vengeance …the Tacubos deliver one of their strongest albums ever. …great melodies, tasteful arrangements, and lyrics that simultaneously live in sublime and mundane worlds. It is a personal, ambitious album that experiments without ever losing its pop sensibility and accessibility. It grooves it rocks, and it makes you want to go back to it over and over again.”

“This is their 7th studio album in their 20 years of making groundbreaking music that seamlessly fuses sounds and genres, and without fail, this is another masterpiece …Their vast repertoire only seems to get better with every new album they release. El Objeto Antes Llamado Disco is a manifestation of Café Tacvba’s evolution and maturation that excites the listener with each track — they remain fresh and energetic which is impressive considering their longstanding career as pioneers of Mexican rock. If this is what aging gracefully sounds like then it makes me look forward to the future.” – Remezcla

“Best Tracks of 2012:  Undergoing an eclectic transformation with every release, Café Tacvba never seizes to amaze me. From bolero playing paisanos to electro-rock/punk masterminds, they’re still the ultimate band after a 20+ year career. Since their last album Sino five years ago, they finally came together in 2012 to release El Objeto Antes Llamado Disco. Its first single, “De Este Lado Del Camino,” says it all: the band’s evolution from lyrical confessions to a heartfelt delivery with lyrics and instrumentation. …mildly-melancholic and lyrically introspective, reflecting the maturation of this legendary quartet. It gives us the chills.  – Remezcla

“The first single taken from Tacvba’s new album, “De Este Lado Del Camino”, is simply stunning. It is extremely melancholic and uplifting but different from anything else you have heard before. And that’s Café Tacvba … the album sounds huge, detailed, clear and compact without being digitally unlistenable. There are a lot of electronic elements, noises and textures that constantly come and go… Here, we just have forty minutes of pure musical bliss …El Objeto Antes Llamado Disco is a unique album in their discography that is challenging and rewarding for those who are interested in diving into Café Tacvba’s musical world.”- SoCal Music today 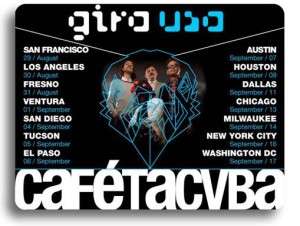