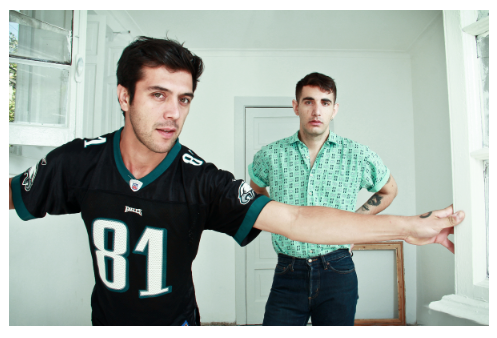 Chile’s ‘Prince of Pop,’ Alex Anwandter and Daniel Rivera (Gepe)
To Release Collaboration Album ‘Alex & Daniel’ On August 19th“Alex & Daniel is an excellently realized pop record of vibrant insouciance
and great tunes, which reflects the diverse talents of both musicians
as composers and performers.” Sounds and Colours“The compositions on Alex & Daniel truly resemble double exposures,
no foreground or background; their appeal would be lost or at least
incomplete without each contributor,” Club Fonograma
‘Alex & Daniel’ is a collaboration between two of Chile’s most celebrated pop pioneers Alex Anwandter and Daniel Riveros (Gepe), who were brought together by a mutual admiration of the other’s music.The album ‘Alex & Daniel’ will be released via Nacional Records on August 19th. As a duo, the two artists seamlessly fuse the dance-pop and heartfelt balladry that characterize their individual sounds.Alex Anwandter, celebrated by critics and fans alike as the “Prince of Chilean Pop,” is one of the leading names of Chile’s new vibrant pop scene. Alex Anwandter brings together 80’s-influenced dance music and emotional songwriting, presented with an engaging live performance full of intimacy and showmanship.

Daniel Riveros, otherwise known as Gepe, began his musical career playing with Chilean singerJaviera Mena. His solo career has been a major influence on the emerging new Chilean pop sound, with a combination of folk and electronic music with contemplative songwriting and undeniably catchy melodies.