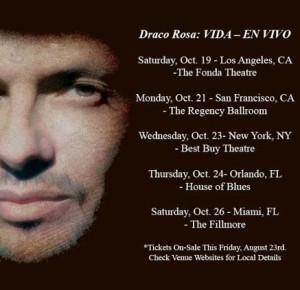 “After an encounter with mortality, one tends to take stock of life with a sense of gratitude and renewed purpose. Robi Draco Rosa goes one better on Vida, his first recording after winning a battle with cancer …a dazzling new entry in the artist’s already significant catalog. Rosa assembled a tremendous cast of guests from many parts of the Latin music world. …The overall tone of the set is simultaneously celebratory and reflective. The arrangements are full of elegant touches and surprises; they showcase the heart of these songs while opening them wider …woven together in an entirely seductive and graceful manner. Vida was one of the most anticipated Latin albums of 2013; it more than lives up to the anticipation. …Vida transcends genre limitations. It will appeal to virtually anyone who appreciates great songwriting, arranging, production, and, most of all, inspired performances. Rosa may have assembled this fine cast in order to celebrate life, but in doing so he has delivered what will undoubtedly be one of the best popular recordings of 2013. Period.” – All Music
“In 2011-12 [Draco Rosa] fought off life-threatening non-Hodgkins lymphoma. When he could record, he revisited his old songs and worked to make ‘Vida’, an album of all-star duets:. …It’s an album of eclectic Latin pop, dipping into new wave, Caribbean styles, electronica and, at the end, hard-rock blasts with reggaetón rapping from Tego Calderón and Calle 13. Yet despite all the companionship from Draco’s guests, it’s a dark album, full of minor-key songs about solitude, loss, love, mortality and time.” – Jon Pareles, SUNDAY NEW YORK TIMES / “PLAYLIST”
“While beating cancer, Draco Rosa made an album of duets inspired by life … Musicians and singers often talk about albums being labors of love, passion projects they’ve created with almost no regard for commercial success. For Draco Rosa, the inspiration behind ‘Vida’ is in its title. Life itself – and the looming possibility of death. He recorded the album during and after his battle with non-Hodgkin lymphoma …’Vida’ is a star-studded tribute to Rosa’s past, present and future. The album includes new takes on 16 tunes from his catalog, recast as duets with Shakira, Martin, Juanes, Romeo Santos, Maná, Marc Anthony and others. the songs are accessible and pop-minded but still retain Rosa’s moody, alt-rock spirit.’Vida’ debuted atop Billboard’s Latin Albums chart, easily his most commercially successful work to date. Single “Más y Más,” featuring Martin, is the biggest hit of Rosa’s career. It’s an eloquent, focused album that makes the most of Rosa and his chemistry with so many stars without overshadowing his restless spirit.” – Houston Chronicle
“For a while Draco Rosa was losing his grip on life, fighting a gritty battle with non-Hodgkin’s lymphoma, finding himself alone in his room, facing his own mortality…Now, ‘Vida’ is no longer a farewell for Rosa but another milestone in a long and award-filled career.” – ABC News/Univision
“Draco’s reputation as a serious artist has long been well established. But Vida is, literally, the album of his life. At least in my book, this is THE Draco Rosa album.” – Enrique Lopetegui, San Antonio Current
“Cancer free, and with a new perspective on life, the singer-songwriter Draco Rosa starts a new chapter in his life full of creativity, love, and gratitude.” – People en Espanol
“Draco Rosa is Reborn With ‘Vida’ – a soundtrack to his recovery …After being diagnosed with cancer two years ago, the singer-songwriter produced ‘Vida’ as a response to his illness… The duets album was created between visits to the hospital and his recording studio surrounded by friends – in hopes of leaving a beautiful album behind as a testament if he were to be defeated by his illness. Now smiling and recuperated, Draco Rosa confirmed that ‘Vida,’ far from being his last testament, was a fundamental part in his recuperation.” – EFE (translated)
“After fighting and winning the battle against cancer, Puerto Rican singer, songwriter and producer Draco Rosa is celebrating life with Vida, one of the most anticipated Latin music albums of 2013. The new production includes outstanding duets with some of the biggest Latin stars in the world… the good news is that Vida goes far beyond its own expectations… Draco Rosa was able to put together a group of artists whose diversity enhances the whole appeal of this production. ..Musically speaking, Vida offers a mature sound that is both reflective and mysterious… the overall quality of that sound is fantastic…One of my favorite things about Vida is its ‘generosity’ in terms of elegant musical arrangements. In fact, this is an album where every single song will surprise you in one way or the other. Draco Rosa not only has given us the opportunity to celebrate life but also an outstanding work that very likely will be among the best Latin music albums of 2013”
-Latin Music