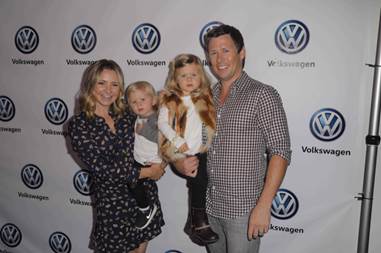 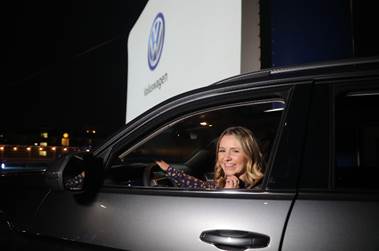 Beverley Mitchell and family attended Volkswagen’s Drive-In Movie Event Featuring the All-New Atlas last night to celebrate the launch of some of the brand’s newest vehicles including.

While Volkswagen was most excited to debut a piece of the brand’s future last night, it was also #ThrowbackThursday… As guests arrived at the Ace Museum in Los Angeles, they were greeted by a vintage Beetle and were then shuttled up to the rooftop via a Volkswagen e-Golf, the brand’s first all-electric model sold in the U.S.

On the rooftop, which was transformed to resemble a classic drive-in movie theater, guests enjoyed light bites, drinks and, in keeping with the #ThrowbackThursday theme, an outdoor movie screening of Ferris Bueller’s Day Off. Some watched from the lawn, complete with picnic tables and blankets, while others hopped into Volkswagen vehicles for the full drive-in movie experience.

Beverley Mitchell and family looked so happy, laughing and playing before the start of the movie. Daughter, Kenzie, looked especially joyful with her Care Bear in hand! Beverley took a seat in Volkswagen’s new Atlas and gushed about how spacious the vehicle is. Once the movie began, the picture-perfect family all sat back and munched on corndogs and truffle popcorn while watching the film.

Guests had the opportunity to see the all-new Volkswagen Atlas on display. The launch of the Atlas caps more than four years of work by engineers, designers and planners who set out to design a kind of vehicle Volkswagen has never built before – an SUV sized for the modern American family. With seven seats, a choice of two engines and a suite of available technology from a reconfigurable display to an active lane departure warning system the Atlas arrives as the boldest new Volkswagen SUV yet.

About Volkswagen Atlas:
Engineered from Volkswagen’s award-winning Modular Transverse Matrix (MQB) architecture, the Atlas draws on the latest Volkswagen design DNA to create a bold new look in the SUV segment. At 198.3 inches long, 77.9 inches wide, and 69.6 inches high, Atlas is larger than any other Volkswagen on sale in the U.S., yet it retains classic proportions and clean lines that create a sense of timelessness and precision. Up front, standard LED headlights and LED Daytime Running Lights combine for a unique visual signature, with optional LED tail lights to complete the look. Inside, the Atlas makes maximum use of its dimensions to offer space for seven adults and their luggage. The third-row can be easily reached by an innovative folding seat solution, one that works even with child seats installed in the second row. Simple, driver-centric displays enhance the feeling behind the wheel rather than distracting from it; while the available Volkswagen Digital Cockpit allows drivers to reconfigure how they view vehicle information.