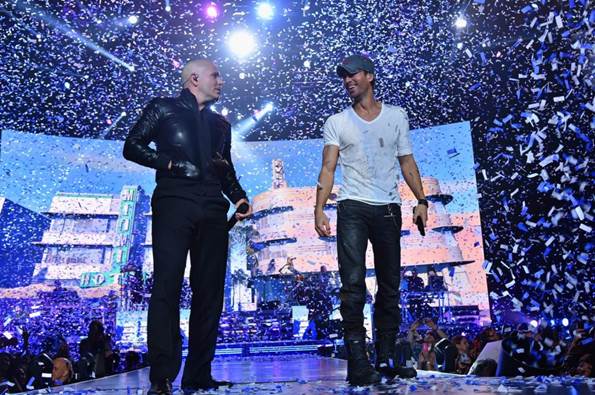 Taking The Mantra of “Don’t Stop The Party” To Heart, Music’s Hottest Tour Of The Year Will Now Return For A Second Set Of Concert Dates Beginning In January 2015

Once Again Featuring New Chart-Topping Urban/Latin Star J Balvin Opening, The Tour Will Be Returning To Las Vegas For Superbowl Weekend, Arrive In The Bay Area For A Not-To-Be-Missed Valentine’s Day Show, And Take To Stages Once Again In Los Angeles, Chicago, Across Texas And More Cities

“Enrique Iglesias & Pitbull’s concert stands as the best of the year in terms of pure enjoyment …a nonstop, nearly four-hour, super-sexy, dance party in which the high energy never waned” – Las Vegas Sun

*Public on sale November 6; Pre-sales November 4-5, 10a- 10p. Visit Individual artist websites for more ticket on sale details
*An exclusive presale will be happening for all Enrique Iglesias Community members at http://enriqueiglesias.com/memberbenefits on November 4th, 2014 at 10AM local venue time. If you’re not already an Enrique Community member, sign up for free for access to exclusive content, fan forums, presale tickets and more
– – – – – – – – – – – – – – –
“With these two rocking the house, why even put chairs in the arena? No one uses them. [They] had the sold-out audience dancing from the floor to the rafters. Hit after hit after hit”– OC Register

Pitbull & Enrique Iglesias – Madison Square Garden, Better Than: Derek Jeter’s last game in Yankee Stadium… everyone felt like they had just experienced their wildest club night in a while.”- Village Voice

“Enrique & Pitbull were unstoppable in L.A. They performed to a full house two nights at STAPLES CENTER. 35,000 people came to dance and sing with the world’s two most acclaimed Latin artists” – La Opinion

“A Full House for Enrique Iglesias and Pitbull …El escenario se llenó de música, baile, coreografías y una energía que contagió y puso a bailar a los espectadores.The stage was filled with music, dance, and contagious energy in a night that will not be forgotten by the 18,000 fans that attended” – El Diario

“Enrique Iglesias, Pitbull deliver dynamite doubleheader …sometimes it’s just too hard to pick only one side. Why bother, when you can split your affection between two superstars on the same evening?” – San Jose Mercury News

“Enrique Iglesias and Pitbull blasted a packed house with two-dozen monster hits. The pair combined to perform for a solid three and a half hours stacked with recent chart-toppers …with both acts sweeping the crowd up into a bumping, bopping mass of dance-mania” – Star-Ledger (NJ)

“The show marked a new level of excellence for both [artists]. Iglesias rocked harder than ever… one for his highlight reel… Pitbull wasted no time reminding everyone that he’s Mr. Worldwide… Immediately, hands were in the air, arms were flailing and nearly every booty was shaking and quaking. The screams were deafening throughout the set, as they were for Iglesias earlier…As astonishing as it is to see thousands erupt into joyous dancing, song-to-song, it’s equally cool hearing many of them singing and rapping to every single lyric.”- San Antonio Express News