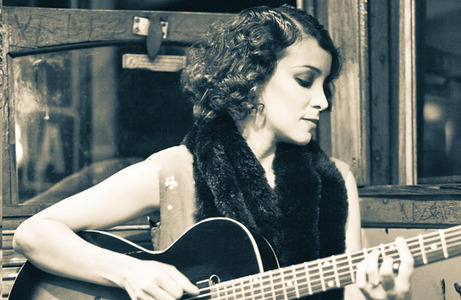 “a refreshing respite from the usual holiday fare…

a festive and feisty journey through the Americas”

Billboard Has Just Declared The Album:

…the soulful Gaby Moreno has gone and recorded a

In her first new release since winning the LATIN GRAMMY Award for Best New Artist,acclaimed bilingual singer-songwriter Gaby Moreno continues her devoted musical exploration of Blues-based roots music and the time-honored Latin rhythms of her heritage – while infusing a sense of warmth, family & intimacy inherent from her longstanding love of the holidays (Moreno’s birthday just happens to fall on December 16 -coinciding with the start of the traditional Latin American celebration ‘Las Posadas’ which appropriately gives this album its name).The result is a genuinely heartfelt collection filled with unique new interpretations of traditional Christmas songs of The Americas & Spain that take listeners culturally far beyond just Feliz Navidad this season.(See Full Track Listing & More Details Below)

“Gaby Moreno’s ‘Posada’: An Instant Latin Christmas Classic: Gospel, soul & acoustic sounds from singer’s roots revive a set of traditional holiday songs. As quietly as making angels in the snow, the soulful Guatemalan singer Gaby Moreno has gone and recorded a praise-worthy Christmas album that could well become a Latin holiday classic. On Posada, Moreno blends her love of gospel, soul and piano jazz with acoustic sounds from her Central American roots to revive a set of traditional holiday songs. Moreno digs into standard Spanish-language hymns with fervor, delivering a hallelujah-worthy “El Niño del Tambor” and bringing a little naughty to “Peces en el Rio” in a revved-up cabaret version of the children’s Christmas classic. On an album that includes English and German-language lyrics, the singer seduces with a retro ‘Have Yourself a Merry Little Christmas’ set to brushed drums… and adds some honky tonk to ‘Go Tell It on the Mountain.”–Billboard

“Gaby Moreno- ‘Posada’:…’El Niño del Tambor,’ the Guatemalan blues-folk singer Gaby Moreno’s take on ‘The Little Drummer Boy’ is salty and scratched-up, and slow too, but not like the original. Hers has reluctance and weight. Ms. Moreno, who was named best new artist at the Latin Grammys last year, has a way of breaking familiar songs down to their core and showing off the shards. And ‘Posada’ is far more than the sum of its parts. It also employs purposeful blurring of traditions, as on ‘Adeste Fideles,’ on which the horns of a hymn become the horns of a banda — or is it the other way around?”–New York Times, Holiday Gift Guide, 11/27/14

In a refreshing respite from the usual holiday fare, this Guatemalan singer-songwriter takes the listener on a festive and feisty journey through the Americas, sung in English and Spanish. – Boston Globe

“POSADA is a collection of traditional Christmas songs, recalling the years when I was a young girl living in Guatemala and singing in my church choir. These are the songs we would sing during the month of December at church on Sundays, at Advent family gatherings and for the traditional Latin American celebration ‘Las Posadas’ which begin on Dec. 16th -Which also happens to be my birthday. I thought of the name ‘POSADA’ for all these reasons but also for what the word entails (‘Shelter’ in English). A time when all we want is to be close to the ones we love. A safe haven, away from the madness and the mundane of the world, even if only for that one moment of the year.” – GABY MORENO

Latin GRAMMY winner (Best New Artist 2013) Singer-songwriter Gaby Moreno has just released her latest album (and first full length Holiday- themed album), POSADA (“Inn”) after a busy year of touring in the United States, Europe, and Latin America.   This unique collection of holiday songs have a seamless mix of Holiday songs sung in Spanish as well as Old Spirituals sung in English with gutsy cred.  The warm sounds of “Primer Noel” (“First Noel”) and “El Niño Del Tambor” (“Little Drummer Boy”) bring familiar echoes of Holidays past, present, and future. The festive cumbia-tinged “El Burrito Sabanero” drops you right into a family celebrating the holidays with a Latino slant.  The bluesy “Go Tell It On The Mountain” will find Moreno’s version as one of more memorable renditions in recent memory. Recorded at Sonic Ranch Studios in the farming town of Tornillo, TX (30 miles east of El Paso) Gaby teamed with Austin Music Hall Of Fame artist David Garza who played the role of multi-instrumentalist, along with longtime ace drummer Sebastian Aymanns and holding down the low end on bass- Leslie Lowe. POSADA was recorded over a few days and finished off in the Los Angeles.  POSADA captures Moreno’s essence as a multi-cultural artist bringing you into her unique kaleidoscope and plays music that is both new and familiar and always inviting.

“Original, fresh and provocative …This woman has some serious soul… [She] sings & your neck hair stands at attention. Her voice makes your jaw drop.” –Music Connection

“Whatever you’re doing right now, I suggest you drop it. Sit down and let yourself be taken aback …Gaby Moreno is simply breathtaking. …she’s a fantastic singer, with a narrative storytelling style well beyond her years, and a passion that outshines her contemporaries… Moreno stands out in a sea of audio-enhanced pop, and has already jumped into the ranks of great Latina singers… her music, filled with raw emotion, is immense because she’s so very human.” – NPR

Through the Eyes of Alejandro Montesinos

La Santa Cecilia To Appear On This Wednesday’s...