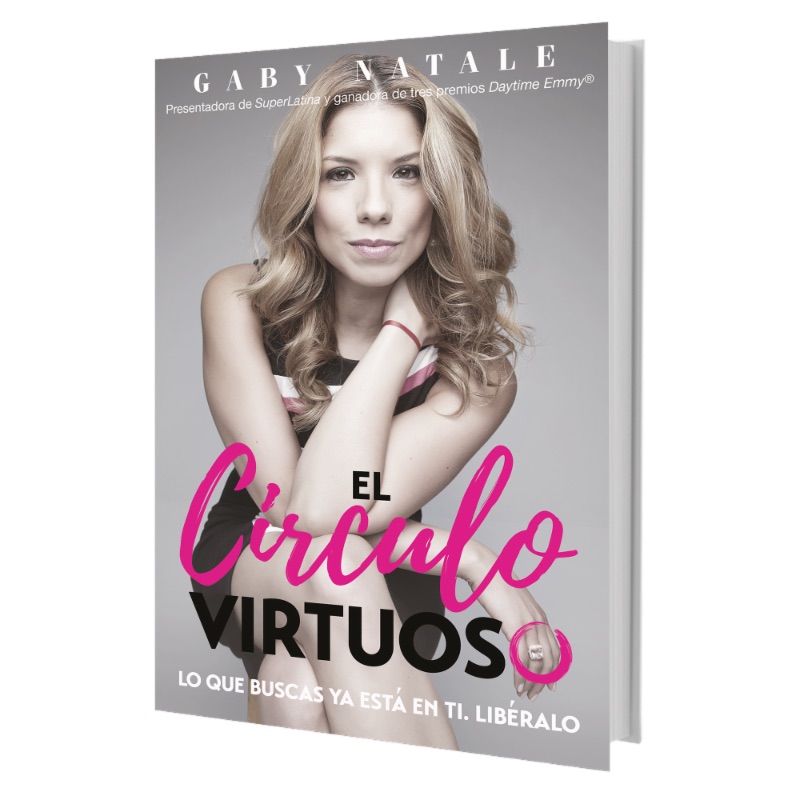 On the heels of her third Daytime EMMY win, a blockbuster year just took a turn for the better for Gaby Natale. Earlier this month, her soon-to-be-released motivational book, El Cí­rculo Virtuoso (TRANSLATION: The Virtuous Circle) hit the top of the new releases chart of Amazon’s pre-sales in the category Motivational Books in Spanish.
“When something is ready to become a spiritual narrative, its message is spread far beyond our imagination. El Círculo Virtuoso is a book that arrives at uncertain times carrying an awakened message of personal transformation that aims not just for individual achievement, but also for collective wellbeing”, Natale said.
A mix of autobiography and smart living manual, El Círculo Virtuoso borrows elements from Japanese art, post-WWII industrial design and Silicon Valley innovations to develop a system of seven archetypes that can help anyone recognize their potential, hone their skills and accomplish their goals in a methodical way.
The idea for the book was born when the author noted a pattern. “After spending 10 years doing interviews with people at the top of their field -from the arts to science to sports- I noticed that these super achievers had many things in common, from their ability to be self-aware of their own potential to their daily habits to their need to give back. Based on a decade of observation, El Círculo Virtuoso provides a model that all of us can follow to improve our lives”, said Natale.

Published by HarperCollins Español, El Círculo Virtuoso will be released on July 25, followed by a nationwide promotional tour. Gaby Natale’s promotional appearances and speaking engagements include:
–       June 1st, Mexico City – Innovation Match Conference
–       June 24, Chicago, IL – ALA Annual Conference (American Library Association)
–       July 29th, Houston, TX – Hispanicize Texas Conference
–       July 31st – August 4th – Miami, FL – Promotional Media Tour
–       August 3, Miami, FL – El Círculo Virtuoso Book Launch at Books & Books
–       October 13-15 New York, NY – Festival People en Español
–       November 2, Austin, TX – Texas Conference for Women
*Additional dates to be announced
For press inquiries contact: Jorge Cota  jorge.cota@harpercollins.com
For speaking engagements and promotional appearances contact: questions@aganarmedia.com
ABOUT GABY NATALE
Gaby Natale is a multiple EMMY-award winner media personality, entrepreneur and influencer. She is the executive producer and host of the TV show SuperLatina that airs nationwide in PBS en español (VmeTV).
In 2017, Natale won a Daytime Emmy in the Outstanding Daytime Talent category, becoming the fist TV host to win this award back-to-back. On May 2016, Gaby and SuperLatina won the Daytime Emmy award for Outstanding Daytime Talent in a Spanish Language Program and Outstanding Entertainment Program in Spanish, respectively, making it a first for an independently-produced Spanish language show.
Gaby Natale is one of the few women in the entertainment industry who owns not only the rights to her TV show but also a television studio. This unique situation has allowed her to combine her passion for media and her entrepreneurial spirit.
In the digital world, Gaby has developed a thriving fan base, with over 50 million views on Youtube and 200K+ followers on Social Media.
She is also the co-founder and President of AGANARmedia, a marketing company with a focus on Hispanic audiences. AGANARmedia’s clients include Fortune 500 companies such as Sprint, Ebay and Amazon, to name a few.
Gaby Natale’s Book El Circulo Virtuoso Hits #1 in Amazon pre-sales was last modified: June 15th, 2017 by Davina Ferreira
No votes yet.
Please wait...
0 comment
0
Facebook Twitter Google + Pinterest

Cozy up at Pez Cantina for Valentines Day