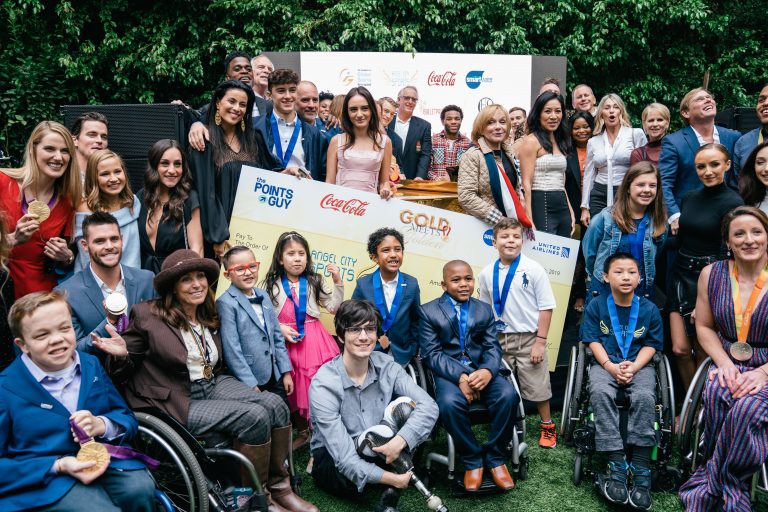 This was our first year attending Gold Meets Golden sponsored by Coca-Cola and smartwater supporting Angel City Sports and it did not disappoint, specially because it was all for an incredible cause at a star studded event.

Hollywood has long been inspired by the sports industry and vice versa, but rarely do these two worlds have the chance to mix and mingle.  On Saturday January 5, 2019, Los Angeles again welcomed some of the greatest athletes from across the world to celebrate the Golden weekend.

As the longest continuous corporate partner of the Olympic Games, “Gold Meets Golden 6” was refreshed by The Coca-Cola Company, and produced and founded by CW3PR’s Charley Cullen Walters and Cinema Magazine’s Scott Orlin. The concept for the daytime brunch began when athletes at the London 2012 Olympic Games were surprised by shout-outs from their favorite Hollywood celebrities, and several of those athletes were invited to Hollywood Awards season.

The outcome was “Gold Meets Golden” – a chance for Gold Medalists and other athletes to engage with some of the Entertainment Industry’s  best award nominees, and realize how much they inspire one another.   The brunch took place at the House on Sunset.

With the recent announcement of the Olympic’s triumphant return to Los Angeles in 2028, Hollywood has been handed a fresh dose of Olympic Fever.  While last year’s Gold Meets Golden celebrated the past, the 2019 event looked at the future by celebrating Youth in Sports. The 6th Annual Gold Meets Golden event refreshed by Coca-Cola and smartwater partnered with Angel City Sports, a leading Paralympic organization in California, with a panel of current, past and future adaptive athletes.

A $50,000 donation was also presented by The Points Guy, Brian Kelly, on behalf of the sponsors including United Airlines, Coca-Cola and others. The charity was Founded in June 2013 when Clayton and Ezra Frech were on the track at the Endeavor Games in Oklahoma City and asked the question, “Why do we need to come to tornado alley to run, jump, and throw things? Why aren’t there more programs in Southern California?”  Shortly after, Angel City Sports was founded with a mission of creating sports opportunities for anyone with a physical disability.

The Coca-Cola Company unveiled new Olympic merchandise as it looks toward the 2020 Olympic Games in Tokyo.  A special room featured golden items related to the new sports that will debut at these upcoming Games.  Additionally, as the presenting sponsor of the Olympic Torch Relay, rare golden Olympic torches were displayed.

I specially love the mission of Angel City Sports which is to create sports opportunities for adults, children, and veterans with physical differences and impairments. Our goals are to encourage physical ACTivity and demonstrate LEADership to strengthen the adaptive sports movement. Our initial programming focus is on Southern California, but our events and programming will draw athletes from all over the country.

Angel City Sports is addressing a significant societal problem that there is a large population of individuals living with physical challenges in Southern California, yet participation rates in adaptive sports programs are extremely low as a percentage of the disabled population.

It was a very exclusive event filled with athletes and celebrities all united for a beautiful cause. This is what the best of Hollywood is all about.

1 thought on “GOLD MEETS GOLDEN: GIVING BACK AMONG STARS”