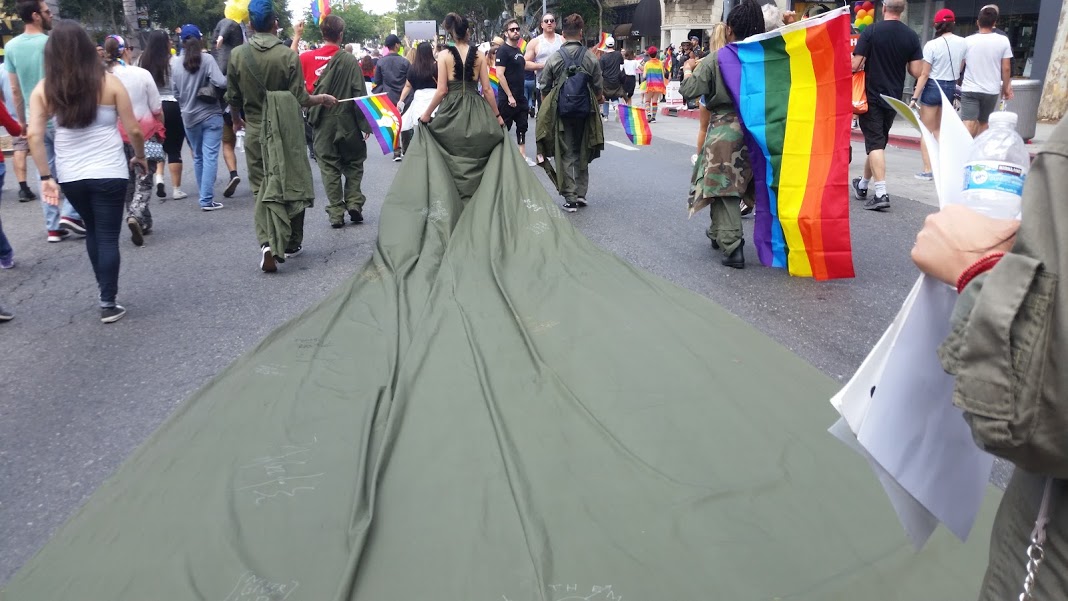 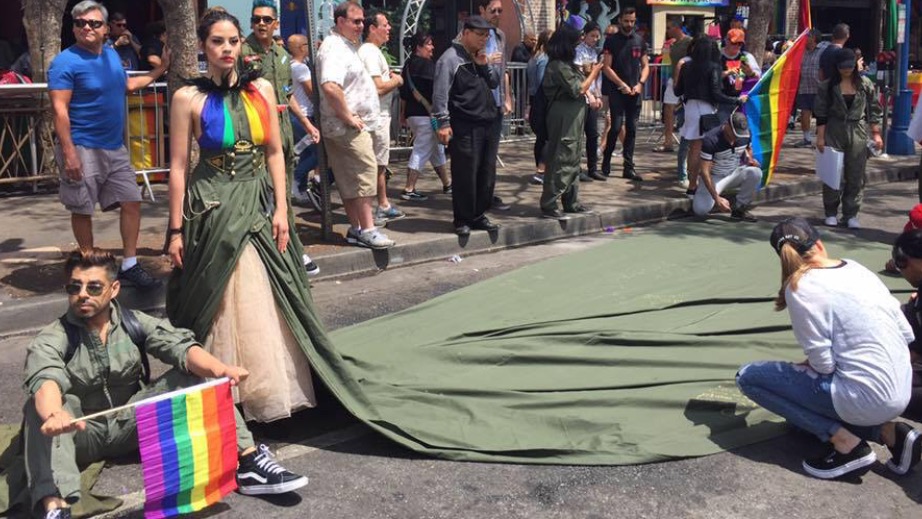 Following a successful run at the LA Pride Resist march, International Couture designer, Uriel Saenz takes his creation to San Francisco on June 25, as it continues its LGBT pride circuit.

National, USA , June 15, 2017: With 17 yards of fabric, the Uriel Saenz ‘’Resist Dress” was designed in solidarity and support of the many LGBTQ people who have served proudly in the military. Marchers and pride attendees are encouraged to sign the Historic dress, documenting the names and messages of people who resist. At the Los Angeles 5 mile Resist March, the dress marched alongside other pride attendees where it made stops along the route as marchers signed the historic dress.

“As we continue to fight for equality, I am committed to using my talents and leveraging my influence to help bring awareness to issues that directly affect our communities. During this political climate, we can’t afford to stay silent” – Uriel Saenz

Uriel Saenz is no stranger to creating conceptual dresses with social/political messages, his work and exhibits have also been seen at the Museum of Latin American Art (MOLAA), where his fresh outlook into the life of art and cultural Icon Frida Kahlo was displayed both on live models and on mannequins during a 30 day exhibit.

Saenz was a former US Marine, with multiple meritorious promotions and honors. His military career was cut short under – DON’T ASK DON’T TELL (DADT). DADT is the former official U.S. policy (1993–2011) regarding the service of homosexuals in the military. The term was coined after Pres. Bill Clinton signed a law (consisting of statute, regulations, and policy memoranda) directing that military personnel “don’t ask, don’t tell, don’t pursue, and don’t harass.” When it went into effect on October 1, 1993, the policy theoretically lifted a ban on homosexual service that had been instituted during World War II, though in effect it continued a statutory ban. In December 2010, both the House of Representatives and the Senate voted to repeal the policy and Pres. Barack Obama signed the legislation on December 22. The policy officially ended on September 20, 2011.

About Uriel Saenz: Contemporary Renaissance Man URIEL SAENZ – International Designer, Business Man, Entrepreneur and Mentor. Saenz is a celebrated leader who is credited as a couture designer, former Military (USMC) and media man (most recently LA Times VP of Multicultural) where he was tasked to create new products that reach the Latino, Black, Asian, LGBT, Women and Military audiences. Saenz is also a Single Gay Dad to his 19-year old daughter. His work has been featured in The Hollywood Reporter, British Vogue, Glamour, WWD, Apparel News and other media outlets including TV, Radio, Magazines and News.

With This Week’s Release Of LOS RAKAS’ Debut...