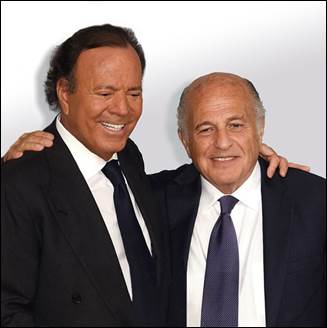 – With Global Music Sales Of Over 300 Million Albums.

to Receive Honorary Degrees at Berklee Commencement May 9

Berklee College of Music president Roger H. Brown will present Julio Iglesias, Doug Morris, Harvey Mason, and Dee Dee Bridgewater with honorary doctor of music degrees at Berklee’s commencement ceremony, Saturday, May 9, at the 7,000-seat Agganis Arena at Boston University. More than 900 Berklee graduates, their parents, and invited guests will be in attendance.

On commencement eve, May 8, as is Berklee’s tradition, students will pay tribute to the honorees by performing music associated with their careers at the Agganis. The concert and ceremony are not open to the public.

Julio Iglesias is the most celebrated figure in Latin music history and one of the top 10 best-selling artists in the world, with over 300 million records sold during a career that has spanned almost five decades. He has set two Guinness World Records: the first in 1983 for having sold the most records in the most languages in history, and the second in 2013 for being the best-selling male Latin artist. That year, he was also recognized as China’s most popular international artist of all time, an award presented by Sony Music China. Iglesias has sung in 14 languages and released over 80 albums. His most popular songs include “Hey!,” “1110 Bel Air Place,” “Non Stop,” “Starry Night,” “Abrázame,” and “Crazy,” and his duets with Frank Sinatra (“Summer Wind”), Willie Nelson (“To All the Girls I’ve Loved Before”), Diana Ross (“All of You”), Stevie Wonder (“My Love”), and Dolly Parton (“When You Tell Me That You Love Me”).

Doug Morris is CEO of Sony Music Entertainment, the world’s second largest music company and home to a broad array of international superstars, including Adele, Alicia Keys, Beyoncé, Bruce Springsteen, Daft Punk, Justin Timberlake, P!nk and One Direction. He also is the founder of Vevo, the world’s leading all-premium music video and entertainment platform. Over his career, he has served as CEO of all three major music companies. Prior to joining SME in 2011, he spent 16 years as Chairman/CEO of Universal Music Group. Previously he served as Chairman/CEO of Warner Music U.S. and the Atlantic Recording Group. Before that, he was founder and owner of Big Tree Records, which was later acquired by Atlantic. A member of the Songwriters Hall of Fame, his songwriting and producer credits include the Chiffons’ “Sweet Talkin’ Guy” and Brownsville Station’s “Smokin’ in the Boys Room.” Over his career he has worked with many of the most popular and influential artists of all time.

Dee Dee Bridgewater is a three-time Grammy Award-winning singer-songwriter and producer, a Tony Award-winning stage actress known for her role as Glinda in the Broadway production of The Wiz, the host of National Public Radio’s syndicated radio show JazzSet with Dee Dee Bridgewater, as well as a United Nations Ambassador for the Food and Agriculture Organization. A true Renaissance woman, she is also the founder and president of DDB Records, an independent record label specializing in jazz, world, and alternative music, and DDB Productions, Inc., a boutique production and personal management company. She has performed with such music legends as Ray Charles, Sonny Rollins, Dizzy Gillespie, Dexter Gordon, Max Roach, and Rahsaan Roland Kirk, among others.