Performing a track from their critically-praised album treinta días, “Los Angeles Best Latin Alternative Band”  will have a primetime concert cameo in the present-day Crime thriller set along the U.S.-Mexico order. 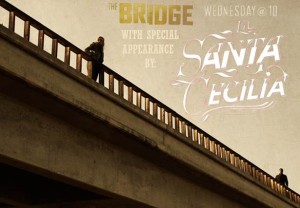 La Santa Cecilia To Appear On This Wednesday’s Episode of “The Bridge” On The FX Network was last modified: August 28th, 2013 by Davina Ferreira
No votes yet.
Please wait...
alegriamagazinefxnetworklasantacecilialosangelesthebridge
0 comment
0
Facebook Twitter Google + Pinterest

NYE Weekend at Create with Afrojack