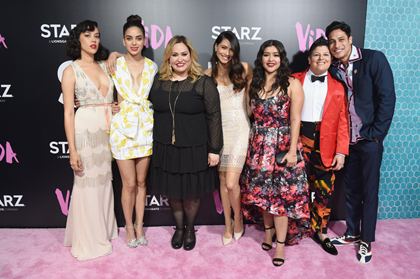 LOS ANGELES PREMIERE OF “VIDA” Premiering on STARZ Sunday, May 6 at 8:30pm ET/PT

Ahead of the screening, Los Angeles government officials proclaimed that May 6th will now be known as “Vida Day”.

“L.A. is the creative capital of the world — and we need diversity in front of and behind the camera to bring the most remarkable stories to life,” said Mayor Garcetti. “Starz’s ‘Vida’ puts a spotlight on one of our most vibrant communities and opens doors for more Angelenos to pursue their dreams in the entertainment industry.”

“On behalf of the California State Assembly and the 63rd Assembly District, congratulations on the premiere of ‘Vida’. While Latinos, women, and the LGBTQ Latinx community are often underrepresented in modern media, ‘Vida’ offers an authentic depiction of East Los Angeles’ most diverse communities. I look forward to seeing STARZ’s continued commitment to promoting and celebrating diversity in Los Angeles. I wish you continued success.”

About the show: An official episodic selection and Audience Award winner at the 2018 SXSW Film Festival, “Vida” is a half-hour STARZ Original Series focusing on two Mexican-American sisters from the Eastside of Los Angeles who couldn’t be more different or distanced from each other. Circumstances force them to return to their old neighborhood, where they are confronted by the past and surprising truth about their mother’s identity.