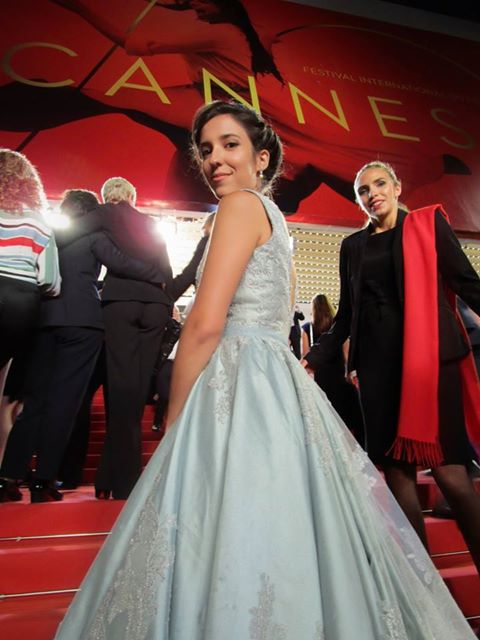 Spanish actress and violinist Rebeca Nuez was introduced to Cannes audiences this year in both musical and acting roles. She was born in Las Palmas de Gran Canaria and raised in Arucas, a small town on the north of the island. She currently resides in Maastricht in The Netherlands. Today, she frequently performs in concerts and recitals in Spain, The Netherlands, Belgium, Germany, Czech Republic and China. Nuez made her debut at the 2017 Cannes Film Festival and Marché du Film, cast in major roles in “In Search of the Miraculous,” “House of Deaths” and “The Spanish Version,” films by British director Brian Skeet.

Being the largest international showcase of cinematic art, the Cannes Film Festival transforms the quaint and beautiful city in the French Riviera into a vibrant place, full of sound and color.

As a first-timer, there is no way to imagine how the experience will be until you actually live it… Once lived and experienced, it’s just beyond words.

The immense amount of film industry people from around the globe, mixed with locals and tourists, turns the city into a melting pot of eclectic energy and excitement.

I had heard the rhythm would be frenetic, but never imagined to what extent! Once I got in Cannes there was literally no time to think. After running down to the Palais des Festivals to pick up my accreditation, I rushed to the Intercontinental Carlton to get ready for the Cannes Fashion and Global Short Film Awards Gala, where I was invited to perform violin with a wonderful colleague and talented pianist Philippe Arcostanzo, who, by the way, is also one of the Riviera’s top DJs.

The days after became a succession of industry meetings, plus some quality time spent with director Brian Skeet, which whom I’ll be working on his next projects. Other special events included the Wanderluxxe Cannes Film Festival Gala Fundraiser to Benefit Planned Parenthood at the American Pavilion, honoring filmmakers Spike Lee and Roger Guenveur Smith. I was delighted to wear designer Andres Aquino’s stunning gown at the event.

A special mention should also go to the annual charity Cinemoi Gala, in which I was also invited to perform. This was a very emotional event, including a remarkably beautiful and heartfelt speech by AKON and a beautiful vocal performance by actress Maria Conchita Alonso. It made me feel really happy to have the chance to support founder Daphna Ziman’s Children Uniting Nations.

Last but not least, the Cannes experience would not be complete without watching films in competition at the Grand Theatre Lumière! Squeezing the surrounding compromises I managed to find time to attend the premieres of both hypnotic “Good Time” (Safdie brothers) and heartbreaking “Aus dem Nichts” (Fatih Akin) towards the end of the festival.  Needless to say, the rushing around during my short stay in Cannes was definitely worth it!

My first-timer impressions couldn’t have been better. What a glorious celebration of arts and culture and how lucky I’ve been to have the chance to be a part of it all!

Now lots of work and projects ahead… Festival de Cannes, see you next year!

NOT SHORT ON TALENT CANNES 2017

“Parfumerie” Opens this November 26 at the Wallis...

The Wallis Annenberg Center for the Performing Arts...