Leading independent label Nacional Records is proud to announce 6 Latin Grammy nominations across a diverse variety of genres and categories, with nominations for Ana Tijoux and Andrea Echeverri, plus two nominations each of La Vida Boheme and Los Amigos Invisibles.

In its first 8 years, Nacional Records has earned 59 Latin Grammy and Grammy wins and nominations. The label’s first release in 2005 was Andrea Echeverri’s debut solo album, with her new solo album ‘Ruiseñora’ now nominated for this year’s Latin Grammy’s for “Best Singer-Songwriter Album”

La Vida Boheme is nominated for two awards, including “Best Rock Album” (‘Será’) and “Best Rock Song” (‘Hornos De Cal’). ‘Será’ was recently celebrated by NPR as a “Best Album of the Year (So Far)”. La Vida Boheme currently appears in the new McDonald’s TV campaign. Chosen by iTunes as the ‘Latino Breakthrough Artist of 2011,’ La Vida Boheme was nominated for a Grammy and two Latin Grammy’s for their debut record ‘Nuestra,’ which was also featured in NPR’s ‘Top 50 Albums of 2011.’ Their music appears in the hit video games Grant Theft Auto V and FIFA.

Los Amigos Invisibles are twice nominated, for “Song of the Year” (‘La Que Me  Gusta’) and “Best Recording Package” (‘Repeat After Me’). This is the band’s third Latin Grammy nomination in a row with Nacional, after their two previous Nacional Records releases ‘Commercial’ and ‘Not So Commercial’ were also nominated.  Repeat After Me debuted Top 10 on the Billboard Latin Pop charts, with the video for their nominated song “La Que Me Gusta” debuted on Entertainment Tonight. The song will also be featured in an upcoming Yoplait television ad campaign. Having toured over 60 countries, Los Amigos Invisibles have maintained an untouchable reputation for both their meticulously crafted albums and stunning live performances, including sets at Coachella, Bonnaroo and Lollapalooza.

Ana Tijoux’s “Sacar La Voz” – a collaboration with Academy Award winner Jorge Drexler – is nominated for “Best Urban Song.” Ana Tijoux’s critically acclaimed album ‘La Bala’ was featured on NPR Music’s “Best Songs of 2012” and NPR Listeners’ ‘Favorite Albums of 2012’, and hit #1 on iTunes charts.  ‘La Bala‘ is Tijoux’s follow-up to her GRAMMY-nominated debut ‘1977,’ which was featured in the hit TV program ‘Breaking Bad.’  Featured in Time‘s ’10 Female Emcees You Should Know,’  Ana Tijoux’s new album has been a hit with fans and critics alike, with the Los Angeles Times writing: “La Bala is Tijoux’s magnum opus, perhaps the most sumptuous album that rap en español has known.” 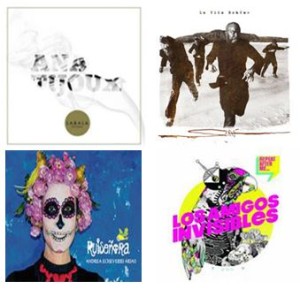 Thank you to everyone who joined us at...