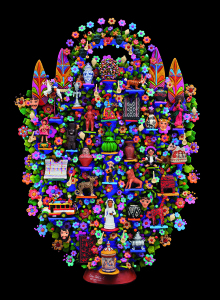 Collection, Highlighting Cultural, Ethnic, Geographical and Artistic Diversity in the Spanish and Portuguese Speaking Countries of the Americas and Europe

The Natural History Museum of Los Angeles County (NHM) today announced that this fall, it will present the U.S. debut of the extraordinary traveling exhibition Grandes Maestros del Arte Popular de Iberoamérica. This comprehensive exhibition of Iberoamerican contemporary folk art features spectacular works from the Collection of Fomento Cultural Banamex. Painstakingly selected to showcase the highest levels of achievement in traditional arts of communities across Mexico, Central and South America and Spain and Portugal, this collection includes works by the leading masters of folk art — with objects created to illustrate their customs, festivals and devotions, myths and traditions, and everyday life. In many cases, the works are contemporary arts stemming from long and rich traditions reaching back to the pre-Columbian era as well as influences from European and other traditions and the creativity of local artisans in reinterpreting longstanding traditions as well as creating new ones.

Curated by Cándida Fernández de Calderón, Director of Fomento Cultural Banamex in Mexico City, the over 1,200 works on view were made by more than 600 of the most accomplished artists from 22 countries including Argentina, Bolivia, Brazil, Colombia, Chile, Costa Rica, Cuba, Dominican Republic, Ecuador, El Salvador, Guatemala, Honduras, México, Nicaragua, Panamá, Paraguay, Peru, Puerto Rico, Uruguay, Venezuela as well as Spain and Portugal. The pieces represent a broad range of specialties and materials including clay, wood, plant fibers, paper, leather, silver, wax, coconuts, beads, shell, glass and stones. All of the works are by living artists, many of whom are well known around their countries and beyond.

“Through our newly launched special exhibitions program, we are able to provide unique and immersive experiences that enhance our permanent offerings. In many cases, they allow us to focus on the global nature of Los Angeles and look at the planet through a broader lens,” said Dr. Jane Pisano, NHM President and Director. “What’s exciting about Grandes Maestros is twofold. The artistry of these objects is astounding. They are world-class in terms of craftsmanship and beauty.  They are

also made by leading artisans from countries that are known and important to L.A. — countries we visit, do business with, and in many cases trace our ancestry to.”

Organized by Fomento Cultural Banamex, the exhibit has been seen previously in Latin America and Spain, but not yet in the United States. Grandes Maestros will be the second special exhibition presented by NHM following the West Coast debut of Traveling the Silk Road: Ancient Pathway to the Modern World.

NHM will host a series of public programs complementing the exhibition, from artists workshops to cultural celebrations of the many countries represented in the exhibit.  From mask-making to weaving to musical performances, there will be programs for adults, children and families.

SPECIAL EXHIBITION TICKET PRICE WILL BE ANNOUNCED AT A LATER DATE

About the Museum
The Natural History Museum of Los Angeles County is located at 900 Exposition Blvd., Los Angeles. It is open daily 9:30 am to 5 pm. The Museum was the first dedicated museum building in Los Angeles, opening its doors in 1913. It has amassed one of the world’s most extensive and valuable collections of natural and cultural history — with more than 35 million objects, some as old as 4.5 billion years. The Natural History Family of Museums includes the NHM, the Page Museum at the La Brea Tar Pits (Hancock Park/Mid-Wilshire), and the William S. Hart Park and Museum (Newhall, California). The Family of Museums serves more than one million families and visitors annually, and is a national leader in research, exhibitions and education.

SEBASTIÁN LLOSA, SINGER AND SONGWRITER BRINGS BACK HIS...