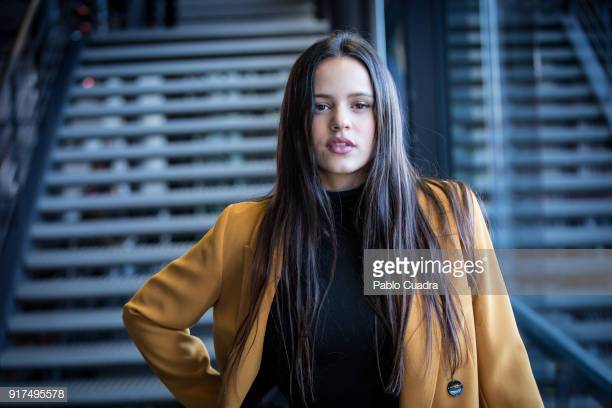 Rosalía’s “Malamente”earned over 1 million views on YouTube in its first 48 hours of release, becoming the #1 viral music video in Spain. “Malamente” has since garnered more than 11 million views, prompting an increase of over 2,600% in Rosalía’s average daily views on YouTube, and a Spotify monthly listener increase of 1135%.The video’s unique sound and look has also spurred social media support from Diplo, J Balvin, Pharrell Williams, Juanes, Alejandro Sanz, Karol G, Pablo Alboran, Sky, Lele Pons & many more.  This past weekend, Rosalía gave a live preview of her upcoming new album El Mal Querer. The feature performance at Madrid’s Festival Cultura Inquieta once again has press in Spain raving about the innovative young artist:

“Rosalía is our Beyoncé… We saw a concert that has gone down in the history of the music of our country, and we analyze the phenomenon of this young woman who mixes flamenco, electronics and urban music like nobody else… an electrifying nervousness crossed the audience of the Festival Cultura Inquieta. We were waiting for HER… and Rosalíadid not disappoint-offering a complete, magical and extraordinary show…‘Malamente’ has become a generational symbol,a sign of what Rosalíais, and can become…Rosalía devoured the stage with her sensuality… the choreography leaves us speechless… I have never seen anything like it” – Telva(translated)

“Rosalia Shines in Madrid with a Revolutionary Album & Show – The singer & producer blew away the audience at the Cultura Inquieta Festival, including movie director Pedro Almodóvar, with her new album and a revolutionary show for Spanish music…The combination of flamenco, pop, hip hop & Latin rhythms has made ‘Malamente this season’s revelation” – EFE(translated)

“The buzz about Rosalia is quickly spreading as she defies easy definition. Want to witness the arrival of an international sensation? Just watch the video for “Malamente” –Billboard

“One of Best New Videos. What a ravishing piece of filmmaking!

“Everyone is talking about Rosalía’s new video ‘Malamente’ – which you will play on loop. There is something in Rosalia which brings to mind Rihanna. It is in her attitude… Only this diva is Spanish. Rosalía recently surprised with Brillo (her collaboration with J.Balvin) a feminist anthem of the 21st century – then returned to thrash the Internet with Malamente.  Is it possible to mix trap and flamenco, a fusion of tango and urban pop? Malamente gives an affirmative answer… and the video clip is one of the best we’ve seen in 2018… Long live the millennial queen of flamenco.”– VOGUE (translated)

“Rosalía’s voice is liquid velvet, unfurling a story in every sigh. The 24-year-old Spanish singer’s new track, ‘Malamente,’ consumes the listener with curling drums and soft synths that tug you into her world completely… the Barcelona-born artist [has] gained traction with the biggest players in Latin music. On ‘Malamente,’ Rosalía asserts her growing star power… it fuses flamenco with pop, reggaeton and R&B. The song’s spine is the staccato sound of hand claps, which continue throughout, poking through the seductive spell of Rosalía’s voice. The world she creates in the song is a glimmering haze…The accompanying video is a trip, too.” – Pitchfork.

“Rosalía is one of a kind…a Barcelona-born singer with a stop-your-heart voice and a breathtaking look… Rosalía tethers her knowledge of traditional styles with modern influences in order to, “revolutionize flamenco… a loving combination that, isn’t quite like anything else around.”- FADER