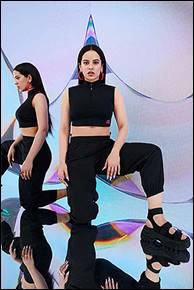 Globally launched yesterday, The Second Season Of “Pull&Bear by Rosalía” is based on the youthful spirit, iconic street imagery, and distinctive style of the groundbreaking music artist.For more details, find the full Pull&Bear press release attached, and visit the collection here:

“Rosalía is launching a new clothing collection …fresh off her first North American tour… Rosalía has unveiled a new line of womenswear in collaboration with Spanish high street chain Pull&Bear. Her second collection with the label…line includes a range of jeans, shirts and athleisure wear” – FADER

Following The Tremendous Critical Praise Of Rosalía’s Los Angeles & Coachella Performances, The Innovative Flamenco & Latin Urban Fusionist Recently Brought Her Limited Engagement “EL MAL QUERER U.S.TOUR” To New York For Two Sold-Out Nights – Where The Accolades Continued: “ROSALÍA IS POP’S NEXT GLOBAL STAR… she’s got the fierce star power required to command any stage, big or small…  The genre-defying artist put on the show of a lifetime” (See detailed reviews below) · With Her Most Recently Released Single “Con Altura” With J Balvin Quickly Climbing The Billboard Latin & YouTube Global Music Charts, Rosalía Plans To Release Additional New Tracks Across The Summer – Ahead Of Her Next Scheduled U.S. Performance At Lollapalooza In August.

“ROSALÍA IS POP’S NEXT GLOBAL STAR — LAST NIGHT, SHE PROVED IT.This was your last chance to catch the singer at this proximity; in a year, it’s a near-certainty

she’ll be touring in spaces at least 10 times the capacity..” – MTV News “Rosalía is a f*cking superstar – Watching the Spanish singer command the 1,500-capacity Webster Hall was witnessing a pop star outgrow herself in real time….I wouldn’t be surprised if the next time I’m seeing her is at Madison Square Garden. Monday night proved that Rosalía not only has artistry, talent, charm, and skill in spades — she can utterly entrance and command a crowd” – FADER

“ROSALÍA PROVES SHE’S LATIN MUSIC’S NEXT SUPERSTAR AT HYPNOTIC NYC SHOW…she’s got the fierce star power required to command any stage, big or small… Rosalía’s set was part flamenco extravaganza, part hip-hop showcase, part Catalan opera, and an entirely thrilling pop spectacle, carrying the power of an arena show… Despite the heavy physicality on display, her voice was just as rich and powerful live as you’d hope, especially when she went a capella and (literally) silenced the entire room. Her subtle touches of theatricality whether it was a salsa dance solo, intricate rope choreo, or simply donning a dramatic veil, went a long way in making the concert feel like a cultural experience.” – Popcrush

“Rosalía made Webster Hall scream… Rosalía returned to NYC a true star in this country, with a growing list of impressive collaborators, and in support of a 2018 album that has redefined her as an influential avant-pop star to Spanish and English speakers alike. Fans who could score tickets packed into the first of two Webster Hall shows that sold out instantly, singing along and screaming louder than I ever remember hearing screams inside a club show…  Rosalía deserved every one of those cheers… Her voice is as amazing live as it is on record. ..she had full command of the stage, her team and the entire crowd, who she addressed with appreciation a few times. It was an arena-ready show, and she seems to already have an arena full of fans”- Brooklyn Vegan “Rosalía Ascends With Electrifying, Sold-Out Webster Hall Takeover When Rosalía took the stage at New York’s reopened Webster Hall for the final of two sold-out shows… it was hard to believe the Catalan singer is barely six months removed from her breakthrough project. The artist’s Spanish-language El Mal Querer arrived last November, enveloping listeners in its mesmerizing current of classic flamenco and futuristic pop. Already a star in her native Spain, the singer earned praise from tastemakers like soon-to-be collaborator James Blake for the LP, which was nominated for five Latin Grammys. And on this occasion, each fan in the surging crowd– which included Dua Lipa and Frank Ocean (and on night one, Gigi Hadid) — seemed to know every word to every song. That is, when they weren’t using every bit of strength in their vocal cords to scream” – Billboard

“Rosalia Solidifies Icon In The Making Title At NYC Show – Rosalía is here to stay. In her second of two sold-out shows in New York City… the rising International pop star made it clear her North American takeover is just beginning. The genre-defying artist, who has somehow managed to perfectly fuse flamenco, pop, and opera in her music, put on the show of — dare I say — a lifetime as she performed the majority of her album El Mal Querer, wowing the crowd with her tight choreography, impeccable vocals, and just over-all impactful hour-long set. For the lucky few that were able to pack into the newly-renovated Webster Hall, they were able to witness first-hand Rosalía’s enduring star-power. Whether she was singing or speaking in Spanish or English, the audience hung on her every last word. They appeared to be in awe of Rosalía’s performance that was highlighted by her flawless team of dancers and backup singers. And it can’t go without mentioning that her moves were just as tight as her rich, live vocals, which perfectly translated through the hall’s speakers. In short, Rosalía is just getting started, and if her performance at Webster Hall is any clue of what’s to come, we’re going to be hearing about her for a very long time.” –iHeart Radio