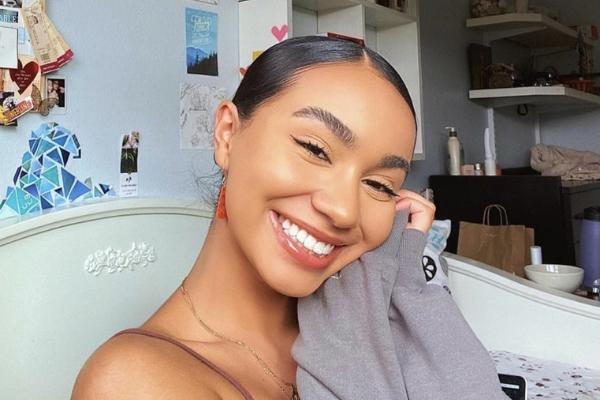 My memories illuminate the rhythms of Abuela’s prayers. Her soft voice carried heavy words, medleys of hope and heartbreak, into the world. As the sun greeted the broken barrio, she would place her fragile palms together in good faith. Devotions dedicated to our ancestors’ peace and affirmations of good health for those she could still hold meant everything to her. Our shared room transformed into a church and she, a holy woman.

Those same hands would knead and season meals into nourishment.

They would run a bath at the end of the night to wash away the day’s troubles. Y sus manos would shield me, in hopes of holding off the world’s haunts.

My small frame would sit beside her in complete awe. This divine feminine energy built up a foundation for generations to stand on. She molded many with her light and love, raising me to see no difference between god and woman. Experiencing our growth, both the good and bad, never became mundane. A sense of pride was painted subtly across her eyes as she watched us chase our dreams.

Abuela observed as I fell in love with the magic of theatre. From memorizing sonnets to performing show tunes, I became fully enamoured with the concept of make believe. As a little girl, I’d spend days in black box theatres, letting my imagination run free. In my dreams, I speak my mother tongue with ease. I know the names of my ancestors, they aren’t just artwork in dated novels or the punchline of a white man’s joke.

If there was one thing I knew, it’s that our stories, both new and old, matter.

In the last five years, the conversation of representation for communities of color has been more present than ever before. Growing up, many of us observed a slim representation of brown and black folx. For the longest time, we’ve been extremely underestimated. This produced a twisted perception of creative success for me and many others. Till this day, the media often portrays us as one dimensional characters that reinforce stereotypes. When you see us on TV, Latinos often play the maids, gang members and inmates. Hollywood fetishizes us or makes us the butt of their demeaning jokes. As a young woman entering my twenties, I now realize the impact this had on both my confidence and identity.

On top of that, there has been minimal racial and LGBT-inclusive representation when highlighting our stories or casting us in roles. We seldom see Indigenous and Afro-Latinx actors representing our diverse community. It is also rare to see LGBTQ+ Latinx creatives having space to have their voices heard through their art. And when these opportunities do present themselves, they are often seen as revolutionary. As if us taking up creative space is some sort of radical act.

Let me make this clear: we should never have to minimize ourselves to be digestible for others. We shouldn’t be ashamed of the way we look, who we love or how we identify. Whether poets, dancers, singers, artists, actors — our work matters! Our talent, our space and our representation matters! To acknowledge people’s truths is to empower them. And to acknowledge communities of color is to stop erasing them. But to continue to brush our stories under the rug is to diminish the importance of our lives.

Sofia Celesté Dower-Vasquez is a Peruvian-American poet and podcast host from Richmond, California. The East Bay Area native has spent the last three years studying at the University of Hawai’i, double majoring in Psychology & Ethnic Studies. Throughout her time on the island, Sofia has continued to explore her connection with poetry and podcasting. Growing up in a family where spirituality and self expression was strongly encouraged, Sofia picked up the art of storytelling. In her work, she tells her truth that’s shaped the woman she has grown up to be.