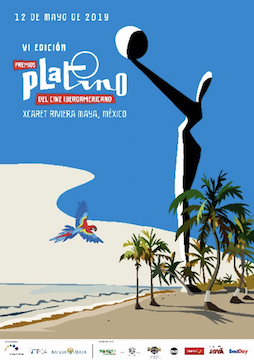 Here are some the nominees that confirmed their attendance at the 2019 Premios PLATINO AWARDS: Among the most eagerly awaited appearances is Mexico’s Yalitza Aparicio, internationally renowned for her starring role in Roma, for which she was nominated for an Oscar. Also attending will be the Oscar nominee for Best Supporting Actress, Mexico’s Marina de Tavira,as well asAnaBrun, the Paraguayan actress who won the Silver Bear at the last Berlin International Film Festival for Las Herederas.

The nominated Spanish director and screenwriter Javier Fesser will be heading to the Tlachco Theatre in Xcaret, Mexico. He will be accompanied by Luis Manso and Álvaro Longoria, the producers of Campeones. Sharing the red carpet are the nominees in the Best Director category, including Cristina Gallego and Ciro Guerra, Colombian directors nominated for Pájaros de Verano, and the Uruguayan director, Álvaro Brechner, nominated for La Noche de 12 Años. Actress and singer Inma Cuesta, performer Anna Castillo, as well as one of the most beloved Spaniards, Paco León, will not miss this event.

The actor, director and producer received several nominations for his TV series Arde Madrid. He has earned the affection and respect of the Latin American community with productions such as the Mexican La Casa de las Flores directed by Manolo Caro, another of the names who has confirmed his attendance.  Antonio de la Torre will also be making an appearance for El Reino, along with the Argentine actor and rap singer, Lorenzo Ferro, the Spaniard, Javier Rey, and the Uruguayan actor, Nicolás Furtado.

One of the most eagerly awaited awards of the night will go to Raphael. The renowned international artist will receive the Lifetime Achievement Award for his career in music & movies. Raphael has promised his audience a big surprise during the Gala evening The Spanish director, screenwriter and producer, Arantxa Echevarría, the Sevillian director, Celia Rico, the Venezuelan director and screenwriter, Gustavo Rondón, the Paraguayan director of Las Herederas (winner of the Silver Bear at the 2018 Berlin Film Festival), will attend this distinguished event.    AND THOSE IN CHARGE OF PRESENTING THE AWARDS ARE…

Among them, the Argentine actor, Chino Darín, one of the cast in La Noche de 12 Años, the Argentine actress and singer, Lali, who in 2016 received the MTV Europe Music Awards for the best artist in South America and who will perform at the gala. We will also be seeing the Spanish Paz Vega (Goya for Best New Actress 2002), Óscar Jaenada (Platino Award for Best Actor 2015 for Cantinflas) and the actor, model and television presenter Maxi Iglesias, whose career is well-established both inside and outside Spain, as well as the Colombian actress and model, Angie Cepeda (nominated for the Platino in 2017 for La semilla del diablo).

Mexican actress, Cecilia Suarez, nominated for Best Series Actress for La Casa de las Flores, will be in charge of hosting the ceremony along with the Spanish Santiago Segura, who has previously hosted the PLATINO Awards. Other guests attending the gala and walking the red carpet, include the Argentinian Araceli González, the Colombians, Natalia Reyes from Pájaros de Verano and the PLATINO ambassador, Juan Carlos Arciniegas, the Ecuadorian, Jorge Ulloa, and the Italian actress, Anna Favella. Among the Spaniards we will see the actors Imanol Arias, Lidia San José, Edu Soto, Elena Sánchez,Mar Saura, and the director Rodrigo Sorogoyen.

Other international guest celebrities who have confirmed their attendance at the gala are Jenia Nenzen (Panama), from the USA Edward James Olmos, Eric Winter and Alyssa Díaz; the Peruvians, Marco Zunino and Gustavo Bueno; Nashla Bogaert and David Maler, from the Dominican Republic; the Uruguayans Alfonso Tort, Sergio Puglia and Federico Díaz; and the Venezuelans Boris Izaguirre and Malena González.  The PLATINO Ibero-American Cinema Awards are promoted by EGEDA (Audiovisual Producers Rights Management Entity), with FIPCA (the Ibero-American Federation of Cinematographic and Audiovisual Producers), and organised in conjunction with Riviera Maya. These awards are supported by Ibero-American Film Academies and Institutes, LatinArtis and the AISGE Foundation and several sponsors, including Xcaret Park, Xcaret Mexico Hotel, Hard Rock Hotel, TNT, Iberia and Cirque du Soleil.