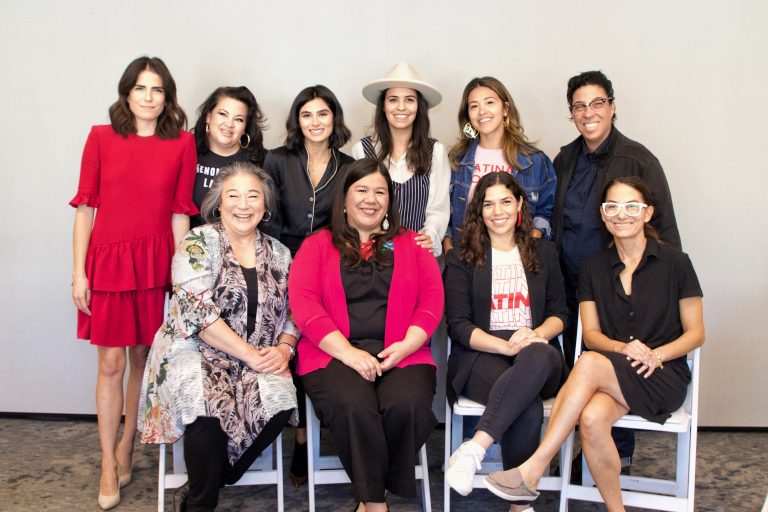 Hollywood producers Olga Segura and Alexandra Martinez Kondracke join forces with activist Mónica Ramírez in a new venture which will amplify Latinx voices in Art, Entertainment, and Activism and elevate the power of the Latinx Community

1. How did the inspiration to create The LatinX House was born?

Olga Segura, Alex Martinez Kondracke  and I met through TIMES UP. Olga and Alex are founders of TIMES UP and I met them because of my role writing the Dear Sisters letter. Over the course of a year we started to see the power and possibility that exists to make great change by bringing together policy, culture shift and activism to build coalitions and make significant change. We started working together to focus on the Latinx community and came to the realization that we could apply many of the same strategies that we were using to make this same kind to change in and for The Latinx community. We started programming together in June of 2017 and about a year later we made the decision to formalize our work by creating The Latinx House.  By doing this work we were able to start creating a network and allies that positioned us to write, organize and publish the Querida Familia Letter in August of this year to all those affected by the ICE raids. We firmly believe that even though there are nearly 60 million Latinx people in the United States and its territories, our opinions, perspective, and priorities are often overlooked and unrepresented in content creation and the national conversation. We founded The Latinx House to remedy this situation by providing a space for our community to collaborate on solutions to the problems that we are facing.

2. How does The LatinX House include everyone regardless of their celebrity status, can anyone participate and become a part of your community?

The Latinx House is for members of the Latinx community, as well as those who want to learn about and support the community. It is for all of us. We aim to change the narrative about the Latinx community so that it is reflective of the entire community and to use it as an opportunity to build power by bringing people together from all walks of life. It specifically will provide educational sessions, networking, community building, and activation opportunities in local cities and at significant events, like Sundance Film Festival. We are committed to uplifting the Latinx community through art, entertainment, policy, and politics. We wanted to create a bridge between activists and influencers in other communities, and we aim to do that by educating, connecting, and helping them become effective allies.

3. Your social/human rights activism has created great awareness in our LatinX community and educated many about pressing issues affecting us today, will your work at The LatinX House continue to advocate for those in need?

Definitely, Olga, Alex and I continue to lift up issues that impact the community, while also shifting the narrative about who we are as a community. I believe that one of the reasons that the Latinx community experiences wide-spread discrimination and we have seen the rise in violence against our community is very much related to how we are being portrayed in the media and by the entertainment industry. We believe that we will be able to improve the situation for Latinx community members and address some of these issues by bringing together entertainment, policy and the opportunity for activation to address some of these pressing issues.

4. What brings you ALEGRIA?

There are so many things that bring me joy. Being able to walk alongside and learn from incredible community leaders, the opportunity to do my work with them through Justice for Migrant Women and National Domestic Workers Alliance, as well as The Latinx House. I believe that we are creating the world of our dreams and we are working together to create great change. I work toward this change for my family, including my incredible son and husband, as well as my other family members. I love seeing the world through my son’s eyes. It gives me a lot of perspective and is one of the chief motivators to why I do what I do. I want to help create a better world for him.

In 2020 we will officially launch The Latinx House at Sundance Film Festival. We will continue to build on our vision for TLH and will set up the house in other places of consequence, mostly at places of cultural and political significance. These events will hold powerful and real discussion sessions about pressing societal issues and will encourage content creation related to them. I am really excited and hopeful about all that is coming in the future.

Mónica is an activist, attorney, and the founder of the nonprofit Justice For Migrant Women. For over two decades, she has fought for the civil and human rights of women, children, workers, Latinos/as and immigrants. You may know Mónica as the woman who wrote the ‘’Dear Sisters’ open letter to the women of Hollywood from farmworker women that sparked the TIME’S UP movement. Most recently, she organized the ‘Querida Famila’ letter that appeared in the New York Times with 200 artists, activists, labor and civil rights leaders signing to support a letter of love and solidarity to the Latino community following the El Paso shooting and ICE Raids this August. As part of her work with Justice for Migrant Women, just this year, Mónica worked alongside leaders in Washington to introduce numerous pieces of legislation (among them the Be Heard Act and The CARE Act) and was awarded the 2019 MAFO Lifetime Achievement Award.

To learn more about The Latinx House please visit the website here: http://thelatinxhouse.org/