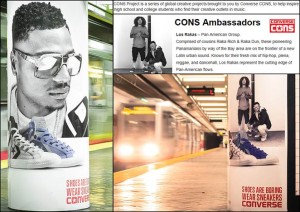 “The bilingual hip-hop crew has caught the eye of Snoop Dogg and Major Lazer. Their CONS list has videos that caught THEIR eyes, like Murs, ASAP Rocky, and Schoolboy Q.” – Vevo

Over The Next Two Months, The Young Ambassadors of Pan-American Flow Will Make A  March Return To SXSW, Followed By The April Release of New Album “El Negrito Dun Dun & Ricardo” From Universal Latin

(Please RSVP as the event is “Invite-Only”)

“This Oakland, Calif., duo — rapping cousins Raka Rich and Raka Dun — prove that some of the most exciting dance music on the planet is still coursing through the Afro-Latin diaspora.” – Washington Post

“Already known as mixtape wizards before they started recording their own songs, Los Rakas concocts a bilingual gumbo from the Caribbean musical diaspora of Jamaican dance hall, reggaeton and reggae, stiffened with straight shots of hiphop and R&B.” –  Los Angeles Times

“Fans of hip-hop, Caribbean dancehall, cumbia, reggaeton and basically any Latin music variety, will all go wild for Los Rakas. It’s a genre mish-mash trick that many try, in one incarnation or another, but it’s hard to match Los Rakas’ specific combination of diverse and tasteful production decisions and seriously impressive hip-hop prowess. The duo, Raka Rich and Raka Dun, represent every bit as hard for the musical legacy of Oakland and the West Coast as they do for that of their homeland. And that’s what makes them so dynamic.” – San Antonio Current

“I love Los Rakas for being the hottest thing I hear out there. They link into each other’s flows with just as much precision as Outkast or the Beastie Boys. I’ve never actually seen emcees tangle off of each other so slickly, without a miss or pause. The illusion of effortlessness is part of what makes some cool, and they generate inspiring mega-wattage the way most people barely wake up.” – Pop Matters

“Raka Dun and Raka Rich represent some of the best in Spanish-language rap coming out of the US, with a classic flow married to beats that draw from dancehall, future bass and good ol’-fashioned boom-bap.” –AOL SPINNER

“‘Los Rakas are building a serious reputation for themselves by mixing the rhythms of reggae and Caribbean dancehall with ferocious, bilingual, emcee devouring microphone skills… Truth is, there’s only Los Rakas really doing this. The bilingual rap and reggae duo out of Oakland (via Panama) are putting all the pieces together: rapping in both Spanish and English over rhythms (and riddims) from a faraway isthmus and from around the block. They draw lines between the immigrant experience and the urban experience; between the black and the brown experience. They rhyme about about what’s really going on, about struggle, about identity.” – MTV Iggy

Cazzette to Open for Avicii at the Hollywood...