Los Angeles, CA (October 27, 2014) – MEGA 96.3FM, a Spanish Broadcasting System Inc., (SBS) (Nasdaq: SBSA) radio station in Los Angeles announced today the launch of the new morning show: “The RaqC and Nachin Show” debuted today Monday October 27. On its first fun-filled week, listeners can expect surprises, the launch of new segments and special guest appearances by Chiquis Rivera, Taboo from the Black Eyes Peas and many more. “The RaqC and Nachin Show” will broadcast live from 6 to 10 AM Monday to Friday on MEGA 96.3FM.
MEGA 96.3FM is the trailblazing radio station in Los Angeles that represents and caters to today’s millennial Latinos; a unique and coveted consumer group that drives the region’s economy, music taste, purchasing trends and social media conversations. The 18-49 LA Latino consumers are uniquely bicultural, bilingual and make up the majority in the Los Angeles market. MEGA 96.3FM features on-air personalities that not only represent but are part of their target consumer group; one of the hard to replicate keys to the success of the radio station.

“We are excited to provide our loyal audience ‘The RaqC and Nachin Show;’ the only morning radio show in Los Angeles that represents young Latinos; a show they can relate to in content, language and culture. Both RaqC and Nachin are proven leaders and personalities that represent the MEGA 96.3FM audience;” said Bill Shadorf, Vice President Corporate Sales/VP West Coast Market Manager at Spanish Broadcasting System.
Juan Carlos Hidalgo, West Coast Programming Consultant at Spanish Broadcasting System said: “We are very fortunate that RaqC and Nachin are back home at MEGA 96.3FM. They represent the new generation of U.S. born Latinos that retain a strong connection to their cultural roots. The duo speaks to an audience that has a unique ability to combine, switch and mix English and Spanish effortlessly and naturally. This will certainly be an entertaining morning show designed specifically for young Latinos in LA.”

Raquel Cordova, better known as RaqC “The Queen of Spanglish Media”, originates from Riverside, CA. Her radio career began in 2000 at U-92.7 in Palm Springs as the morning show co-host. Shortly after, SBS offered her an on-air position with the Mexican Regional station, La Ley 107.9 in Chicago. Her successful run in Chicago allowed her to master the art of radio, as well as fine-tune her second language, Spanish. RaqC enjoyed a successful 8-year run as a top personality for Latino 96.3FM (the former name of MEGA 96.3FM). She is well known in the Latin-American community as being one of the stars on Mun2 top-rated reality show, “Jenni Rivera Presents: Chiquis and RaqC”, and most recently as a Tastemaker for NuVo TV on their newest show, “The Collective”. She has extended her career to various parts of entertainment besides radio including; TV, hosting, blogging, writing, acting and red carpet coverage. Embracing the influence she has on others coupled with her spirit of giving, RaqC founded Amigas4MySoul, a non-profit organization established to promote unity and empowerment among women by providing various events, conferences and self-empowerment workshops with the intention of teaching young women about the power of SELF-LOVE. Never shy of the camera, RaqC has gained media exposure through local and national press at many of Hollywood’s red carpet events such as the ALMA AWARDS and the NHMC’s Annual Impact Awards Gala.
Ignacio Sandoval, better known as “Nachin” is a radio personality born in Mexico and raised in Boyle Heights. “Started from the bottom now I’m here” is Nachin’s favorite quote as he knows firsthand what it is to evolve through life. From early beginnings he overcame poverty through the hard working values set as an example by his mother who sold hot dogs on the street. Nachin’s motivation came at an early age when he realized the only way to a better life was through education. He earned a scholarship to the University of Riverside where he double majored in Theatre and Spanish Literature. Nachin calls himself a survivor and a doer. Growing up as an immigrant Nachin found himself in a world that was divided, as he was a Latino at heart but also an American in every way. In early 2000 Nachin became a radio intern at a station based in LA where his on-air journey began. Ever since then he has worked to give a name and voice to the new generation of millennials that glide between two worlds just like him: “the bilingual and bicultural generation.” One of Nachin’s dreams is to see more young people become educated as they will be the ones leading the future generations.
“The RaqC and Nachin Show” will broadcast live from 6 to 10 AM Monday to Friday on MEGA 96.3FM. 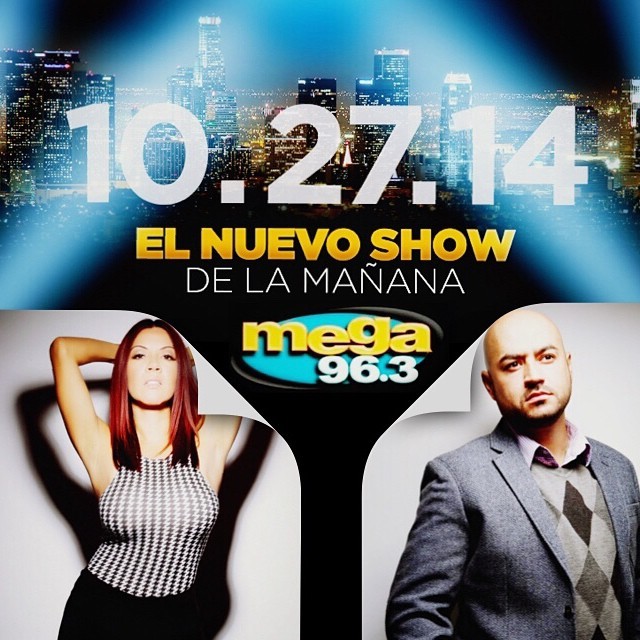