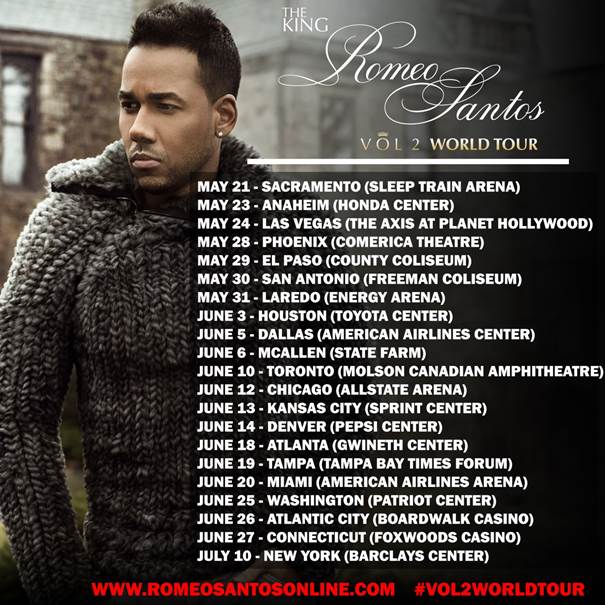 The first U.S. leg of Romeo Santos’ critically-praised Formula Vol. 2 Tour SOLD-OUT at arenas across the country and concluded with a historic SOLD-OUT two-night solo-stand at his hometown’s iconic Yankee Stadium for 85,000+ fans.  Rolling Stone hailed the production as “One Of The Hottest Tours of Summer 2014,” while the New York Times recently selected the Yankee Stadium shows as “One Of Best Concerts of 2014.

“Pink Floyd’s ‘The Wall” couldn’t do it, Jay Z got help from Justin Timberlake and Eminem, and Metallica didn’t try. Selling out consecutive shows at Yankee Stadium, with its capacity of roughly 50,000, is nearly impossible for any pop music artist not named Paul McCartney. But Romeo Santos…the man who carries modern bachata on his back, held a master class

here— not just in the music, which was feather-light, but also in how to keep a crowd of this size on its toes. No one — except maybe Derek Jeter — is more comfortable in this building.”– New York Times

Now, The Multi-Platinum King of Bachata Will Hold Court Once Again With These Second-Leg Arena Dates. (Look For Ticket On-Sale Details Shortly)

Romeo SantosRecently Landed At #1 On Billboard’s2014-End of Year “Top Latin Artists” Chart, And His Landmark Second Solo Album “Formula Vol. 2” Was Declared The #1 Latin Album of The Year. ROMEO Alone Held THREE of the TOP-5 Hot Latin Songs of 2014, While Also GarneringThe Most Radio Airplay And The Most Song Streaming of All Latin Artists.

THIS WEEK Once Again Sees “Formula Vol. 2” At #1 On The Top Latin Albums Chart An Impressive 46 Weeks After Its Release

“Romeo Santos is one of music’s biggest stars — in any language. As if any further proof were needed, Billboard placed Santos at No. 1 on its [Year-End] Top Latin Artists chart, and gave the same position to his latest LP, Formula Vol 2, on its Top Latin Albums ranking.”– New York Magazine

… the massive homecoming show was the best date with 50,000 other people ever conceived. …tackling Yankee Stadium’s major-league capacity for two sold-out nights was both an historic moment and a referendum. ‘If Madonna, if Paul McCartney, if Metallica can sell out Yankee Stadium,’ Santos intoned, ‘Latinos can sell out this too!’  … He is a consummate performer, and Santos’ popularity is not just rooted in #Latinopower but in his massive multigenerational appeal.”-Rolling Stone

“There’s just one solo performer with the drawing power to headline a New York stadium this summer. Nope, not Eminem, Rihanna, Jay Z or even Beyoncé. All those stars had to double-up for their stadium events .Romeo Santos is the only individual artist large enough to go it alone at not one, but two dates” – NY Daily News

“concert goers will always remember the king of bachata’s tour …Romeo had the ladies screaming at alarming frequencies ….Romeo has matured into one those rare-gem entertainers”– NBC News

he’s a magnetic performer and even Hollywood is taking notice: Santos called out Vin Diesel, then announced that he will co-star with the action favorite in “Fast and Furious 7” –OC Register

“Romeo comes on like a king at Staples Center … Santos had complete control over this sold-out, nearly three-hour concert, but he wore his authority lightly, ruling not with an iron fist but an assured caress.”-  LA Times

“Santos made history this weekend. …The Bronx native wooed the crowd with his usual sexual charm making the ladies go wild. Romeo Santos could not have performed a better show” – The Source

“Santos has star-power… flocks of women had come in selfie-ready attire to find their Romeo…He delivered a theatrically passionate performance- dripping romance into thousands of imaginations… ‘roared’ doesn’t begin to describe the crowd reaction. The high-pitched cries could make eardrums hum for days”. – Washington Post

“Romeo Santos incites a frenzy with two shows at The Toyota Center… an exercise in hyper-masculine, hyper-sexual, high-pitched energy …a superstar in any language” – Houston Chronicle

“An unforgettable night … …when he left the stage, a demanding full-house screamed for more. …catch him in concert, no one is more entertaining, interactive and engaging, as Romeo Santos.”- Voxxi

After winning the GRAMMY® for Best Latin Alternative...

Selena For Sanctuary in NYC Is 2 Weeks...

How I Randomly Met One of the Best...