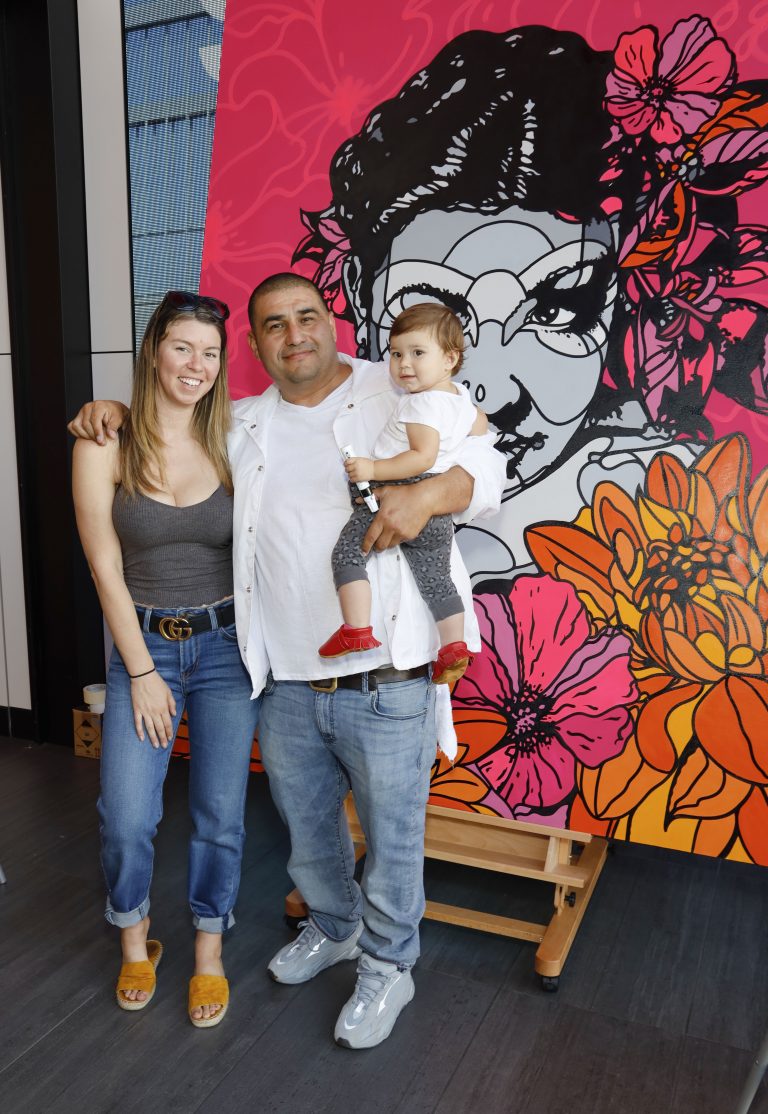 With a paintbrush in hand and his toddler on his hip, California-based artist and muralist David Flores put the finishing touches on his latest painting, an eight-by-six-foot portrait of a Mexican calendar girl. “It’s all steeped in tradition,” says Flores. “Everything just kind of represents Hispanic culture.” The piece features his signature stained glass-style patterns in cool grey, traditional Mexican marigolds, or Cempasúchitl flowers in warm orange, and a background of deep, vibrant magenta. But it’s not just any shade of magenta, this particular shade belongs to T-Mobile.

The wireless provider teamed up with Flores on artwork for limited-edition mobile phone cases in celebration of Hispanic Heritage Month which takes place annually in the U.S. from mid-September to mid-October. Available exclusively through giveaways on T-Mobile’s social channels, app, and in select stores, the phone cases were just one way the company aimed to engage with its Latinx customers and employees during the month-long celebration. Other initiatives included participating in or hosting more than 80 events across the country, a $10,000 donation to the Sea Mar Museum of Chicano/a/Latino/a Culture in Seattle, and they offered a 2:1 match for employee donations to the Hispanic Heritage Foundation.

Javier Barrientos, director of diversity and inclusion engagement at T-Mobile, says that the provider’s decision to participate in Hispanic Heritage Month is centered around pride and celebration.

With a campaign hashtag of #EstamosUnidos, or ‘we are united,’ he says T-Mobile is proactively inviting the Latinx community to come together. “The notion that we need to be united to face those challenges is more important than ever,” says Barrientos, “and that requires that every Hispanic in this country, including the large number of them who work at T-Mobile, and all our allies, step up through concerted action in order to create and drive change.”

With more than half of employees identifying as racial minorities, T-Mobile is the most diverse major wireless company in the country. Barrientos says that the company takes pride in its large Hispanic employee and customer base and stresses that diversity is part of T-Mobile’s DNA. “We believe No Hay Uno Without the Other,” says Barrientos, “which is our way to say this wouldn’t be America without the contributions of the Hispanic community and we wouldn’t be T-Mobile without the contributions of our Latino employees and customers.”

When it comes to celebrating cultural heritage, Flores says he contributes the best way he knows how— creating art. He says having others appreciate his artistic self-expression fuels him professionally, and he hopes his art helps make the ever-diverse Latinx community feel recognized during Hispanic Heritage Month, and also year-round. “Everyone should be proud of their heritage, says Flores. “You can enjoy Hispanic heritage and culture, any race, any time of year.”