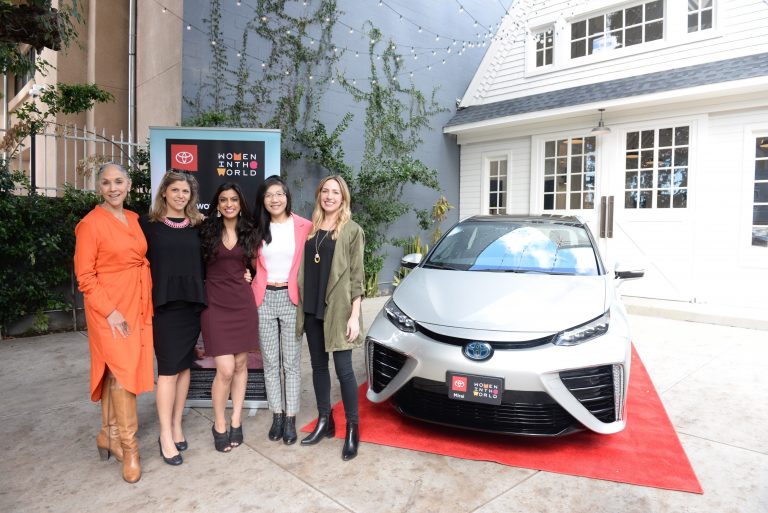 Co-founders Jeanny Yao and Miranda Yang Receive $50,000 Grant at Event Spotlighting Leading Women in Innovation in LA and Beyond

In celebration of International Women’s Day, Women in the World partnered with Toyota to honor Jeanny Yao, co-founder of BioCellection, as its newest Mother of Invention. Yao and her co-founder of Miranda Yang were presented with a $50,000 grant by Jaquelyn Birdsall, Senior Engineer, Toyota Motor North America, to honor their work during “Talk Shop”, an event held at the Lombardi House to celebrated female ingenuity and entrepreneurship, in partnership with The Wing. In addition to Yao, attendees heard from leading women in technology and innovation – working to combat some of Los Angeles’ most pressing issues, including the homelessness crisis and environmental preservation.

Since 2012, Toyota has partnered with Women in the World to support women-led organizations that are tackling the world’s most challenging issues with remarkable creativity. The Toyota Mothers of Invention program has recognized the ingenuity of 25 women with more than $1 million in grants. The awardees — who are leading the charge on issues like homelessness, education, food, water, energy and more, come from all over the world — innovate to create lasting and sustainable impact. Through Toyota’s investment, the Mothers of Invention have developed novel new technologies that have affected the lives of more than 160 million people globally, and are developing novel new technologies that will create positive change for millions more.

Yao and her partner, Miranda Yang, founded BioCellection, an innovation company that invented a process to break the chemical bonds between plastic molecules, turning plastic that would otherwise be non-recyclable into chemicals that are worth thousands of dollars per ton. BioCellection’s tech has the potential impact of recycling about five million tons of polyethylene plastic each year—about a quarter of all polyethylene waste in the world. A video about their work can be viewed here.

Yao said of the award, “I’m incredibly humbled to be honored as a Mother of Invention by Toyota and aspire to create real-world impact with the invention my team and I have developed. I believe this honor will help my organization continue on our path to become an innovative and world-serving enterprise.”Additional speakers at the event included:

WOMEN IN THE WORLD-Women who are on the front lines all over the world come to our stage to tell their stories at our summits and salons. They are activists, CEOs, peacemakers, entrepreneurs, and firebrand dissidents. They’ve saved and enriched lives and shattered glass ceilings in every sector. With vivid journalistic narratives, stirring videos, and provocative discussions, Women in the World is the premier showcase for women of impact and for the men who champion them.