A River Changes Course is the moving and insightful 2013 Sundance Grand Jury Prize winning film that follows three young Cambodian women and their struggle to maintain their traditional ways of life amid rapid development and environmental degradation of the river they have lived and worked on for generations. Working in an intimate, verité style, filmmaker Kalyanee Mam spent two years in her native homeland: from the remote, mountainous jungles and floating cities of the Cambodian countryside to the bustling garment factories of modern Phnom Penh. The documentary traces a devastating and beautiful story of an ancient culture ravaged by globalization and the ever changing environment.  This village and this film is but a small example of what is going on around the world in many third world countries.  The film is a haunting tale of what’s around the corner for our world and Kalyanee’s directorial debut.
In addition, A River Changes Course has garnered many Best Documentary Film awards since it’s world premiere at 2013 Sundance including Full Frame, San Francisco International Film Festival,  and the Atlanta Film Festival.  Sold out audiences everywhere the film plays are moved to standing ovations.  Don’t miss this film. 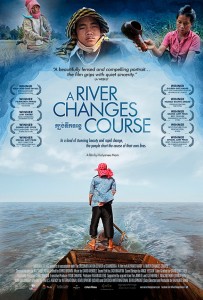