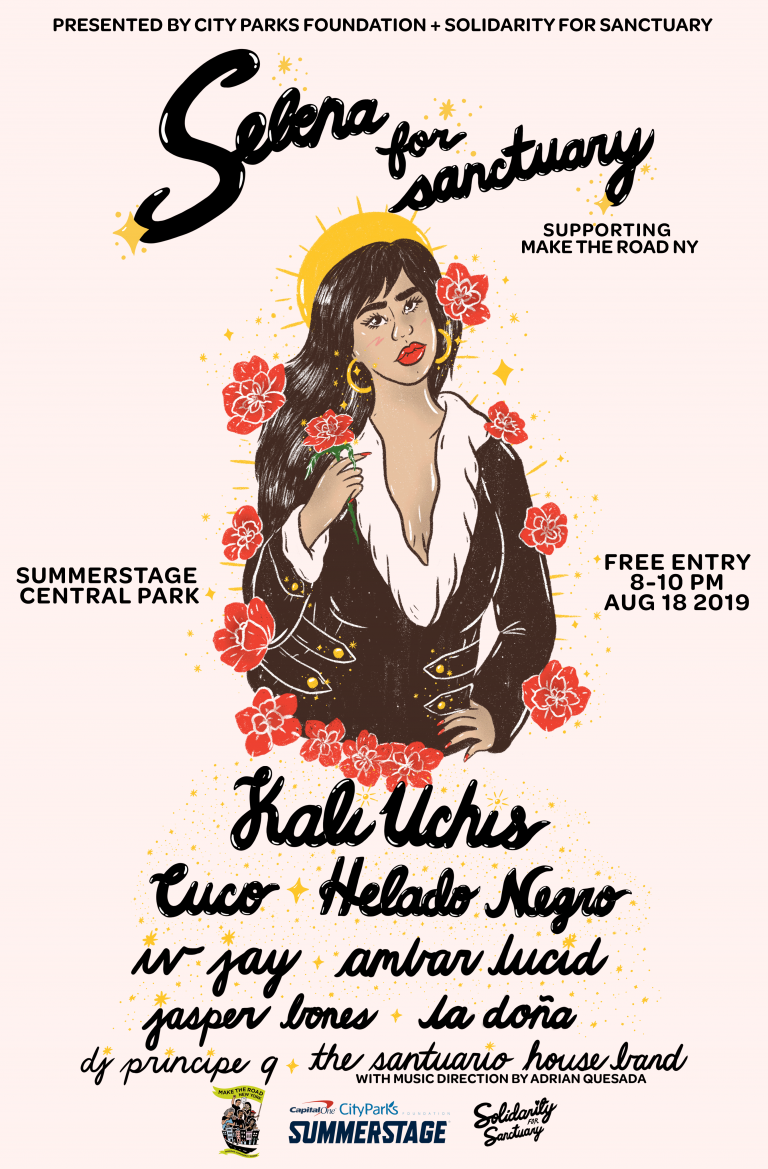 Selena For Sanctuary Will Be Supporting Make The Road NY

Now, more than ever, we need each other- we need the music, we need to elevate communities that are otherwise overlooked, we need to hold onto our precious safe spaces, and create them where they’re being threatened. Enter: Solidarity for Sanctuary– an organization that started as a series of benefit concerts in 2017 put together by artist manager and activist Doris Muñoz. In the throws of the experience herself, Muñoz started Sanctuary out of a need to gather resources to support the often difficult and prohibitive immigration process. Sanctuary does this through celebration- by elevating the art of immigrants and, as a result, raising awareness about the immigrant experience.

Selena for Sanctuary is a series put together by Solidarity for Sanctuary. It brings immigrants and allies together and raises the voices of Latinx artists via a tribute to Selena- the incredible Mexican-American popstar who shattered stereotypes and shifted pop culture as we know it. Starting at the Hi Hat in Los Angeles with a capacity of 300 people, the event has grown exponentially and jumped to New York’s Lincoln Center last Summer. The event series has raised over $14,000 for organizations like Carecen and Amnesty International and has seen its stages graced by the likes of Cuco, Mon Laferte, Gaby Moreno, and beyond.  This Summer, Selena For Sanctuary comes to the iconic City Parks Foundation SummerStage in New York’s Central Park on August 18th for its biggest celebration yet.

On August 18th Summer Stage and Selena For Sanctuary throw a party for the ages- headlining is Kali Uchis, the Colombian-American artist with her distinctive soulful pop that has catapulted her onto the international stage, Cuco, the ascendent chicano bedroom pop star who’s just released his debut album Para Mí on Interscope, and Helado Negro, whose critically acclaimed 2019 release This Is How You Smile has enticed audiences far and wide with its synthy sweetness. Joining them will be Ambar Lucid, the Dominican and Mexican-American singer-songwriter from New Jersey whose sweetly intense voice paired with spacey guitars could make mountains dance, Jasper Bones, a chicano from LA whose wavy soul is perfect for and August night (and all nights, really), IV Jay, the Dominican-Puerto Rican-Colombian artist whose punchy RnB with messages preaching self love and empowerment garnered the attention of Atlantic Records last year. Also joining will be the Bay Area’s La Doña, whose enticing reggaeton tinged Chavela Vargas-like baladas have earned her a cult following at home and beyond.  Principe Q will be DJing the event, with signature selections of Kuduro, Dancehall, hip-hop and RnB. And accompanying will be the Santuario House Band under the direction of the legendary Adrian Quesada (Black Pumas, Brownout).

Selena for Sanctuary will be benefiting Make The Road NY– a 23,000-member organization that builds the power of immigrant and working class communities to achieve dignity and justice. The organization recently co-led campaigns that won driver’s licenses for all New Yorkers regardless of immigration status and the NYS Dream Act, which gives undocumented students access to state tuition aid. The benefit concert series will take place at Central Park’s SummerStage in support of immigrant advocacy group, Make The Road NY and features a lineup of Latinx powerhouses including Kali Uchis, Cuco, Helado Negro, IV Jay, Ambar Lucid, Jasper Bones, La Doña, Selena’s nephew Principe Q, and The Santuario House Band with music direction by Adrian Quesada.

The event will also feature exclusive merch from, Kids of Immigrants, a clothing company created by first-generation Americans Daniel Buezo and Weleh Dennis. Kali Uchis shares about being a part of the event, “So honored to be headlining Selena for Sanctuary this year. Creating safe spaces and bringing awareness to the issues immigrant communities are facing is the goal. I can’t wait celebrate our roots, our journeys, all while paying tribute to the inspirational icon Selena.” The event builds off the success from last year’s sold-out Selena for Sanctuary at New York’s Lincoln Center.

The concert brought in a crowd of over 5000 people, comprised mostly of Latinx youth, brimming with excitement waiting for Latin music heavyweights like Mon LaFarte, Cuco, Omar Apollo, August Eve, Nina Diaz, and Gaby Moreno. The Solidarity For Sanctuary series was first started by organizer, artist manager, and activist Doris Muñoz in 2017 to amplify the voices of immigrant communities through music, advocacy and the arts. The Selena tribute has since gone from a 300 cap room at The Hi-Hat in Los Angeles to the world famous Lincoln Center in New York. Collectively the benefit concert series has raised over $14,000 for organizations like Carecen LA and Amnesty International along the way.

Selena for Sanctuary and City Parks Foundation Summer Stage are thrilled to create such a necessary space one that is safe, joyful, and supportive. Come out and sway with us!

About CityParks Foundation – At City Parks Foundation, we are dedicated to invigorating and transforming parks into dynamic, vibrant centers of urban life through sports, arts, community building and education programs for all New Yorkers. Celebrating our 30th anniversary this year, we program in more than 400 parks, recreation centers and public schools across New York City and reach 300,000 people each year. Our ethos is simple: thriving parks mean thriving communities.